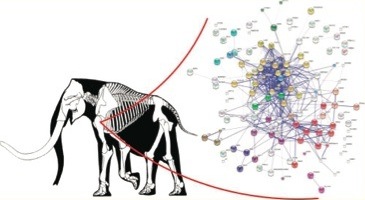 The impact of genomics on archaeology is growing daily, but so far proteomics, the study of the expression of proteins in cells, organs, and organisms, has not yet been successfully applied to material of archaeological remains.

An international team of scientists has managed to identify 126 distinct protein sequences from a 43,000-year old bone from a woolly mammoth (Mammuthus primigenius).

The study, in the Journal of Proteome Research, has according to a report in Nature "unleash[ed] the field of palaeoproteomics by identifying prehistoric protein sequences that could be used to help identify species, evolutionary relationships and even, perhaps, ancient diseases".

The work was lead by Enrico Cappellini a former member of BioArCh, now at the Centre for GeoGenetics in Copenhagen.  "This is a major breakthrough" said Matthew Collins, an author on the study, "it is remarkable to distinguish so many different proteins, not only in bone from permafrost, but also from temperate locations.