and then there were three... 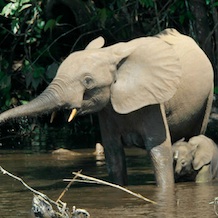 York scientists have helped to demonstrate that the African elephant is in fact two different species. In a collaboration with US and German scientists, Prof. Michi Hofreiter has shows that the Savanna and Forest elephants diverged at least three million years ago.

More details can be found on the BBC website.  The original article can be accessed at PLoS Biology.

Neanderthals had feelings too!

The archaeological evidence for compassion

A team from the Department of Archaeology at York set out to 'fill in the gap' in our knowledge of compassion in our nearest relatives the chimpanzees and that in our own species. They searched the archaeological record for evidence for compassionate acts in early humans and used the evidence to put forward a model of how a human capacity for compassion developed over the past 2 million years. They conclude that it was now beyond reasonable doubt that early humans such as Neanderthals had a deep seated capacity for compassion.

The research is published in the journal Time and Mind, and is available as a book sold in aid of the charity World Vision.