Sound of an Egyptian mummy heard again for first time in 3,000 years

The sound of a mummified priest has been heard for the first time in 3,000 years, thanks to ingenious research by a team of academics. 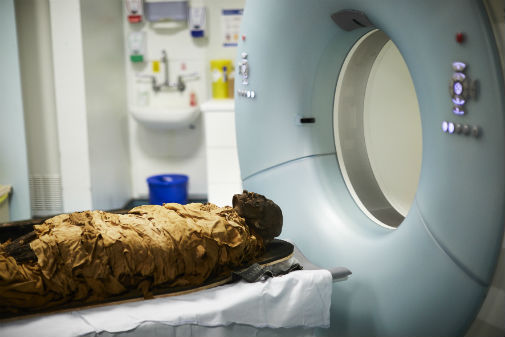 The sound of Egyptian priest, Nesyamun, has been accurately reproduced as a vowel-like sound based on measurements of the precise dimensions of his extant vocal tract following Computed Tomography (CT) scanning. This enabled the team to create a 3-D printed vocal tract.

By using the Vocal Tract Organ, a vowel sound was synthesised which compares favourably with vowels of modern individuals.

The team used a CT scanner at Leeds General Infirmary, part of Leeds Teaching Hospitals NHS Trust, to check to see if the significant part of the structure of the larynx and throat of Nesyamun, brought from nearby Leeds Museum, remained intact.

The scan allowed the academics to measure the vocal tract shape from CT images and based on these measurements, they created a 3D-printed vocal tract for Nesyamun and used it with an artificial larynx sound that is commonly used in today’s speech synthesis systems.

The precise dimensions of an individual’s vocal tract makes each of our voices unique, so for the research to work, the soft tissue of Nesyamun’s vocal tract had to be essentially intact.

Nesyamun lived during the politically volatile reign of pharaoh Ramses XI (c.1099–1069 BC) over 3000 years ago, working as a scribe and priest at the state temple of Karnak in Thebes - modern Luxor.

His voice was an essential part of his ritual duties which involved spoken as well as sung elements.

This innovative interdisciplinary collaboration has produced the unique opportunity to hear the vocal tract output of someone long dead by virtue of their soft tissue preservation and new developments in technology, digital scanning, 3-D printing and the Vocal Tract Organ.

While this approach has wide implications for heritage management/museum display, its relevance conforms exactly to the ancient Egyptians’ fundamental belief that ‘to speak the name of the dead is to make them live again’.

Given Nesyamun’s stated desire to have his voice heard in the afterlife in order to live forever, the fulfilment of his beliefs through the synthesis of his vocal function allows us to make direct contact with ancient Egypt by listening to a sound from a vocal tract that has not been heard for more than 3,000 years, preserved through mummification and now restored through this new technique.

Professor David Howard from Royal Holloway, University of London, said: “I was demonstrating the Vocal Tract Organ in June 2013 to colleagues, with implications for providing authentic vocal sounds back to those who have lost the normal speech function of their vocal tract or larynx following an accident or surgery for laryngeal cancer.

“I was then approached by Professor John Schofield who began to think about the archaeological and heritage opportunities of this new development. Hence finding Nesyamun and discovering his vocal tract and soft tissues were in great order for us to be able to do this.

“It has been such an interesting project that has opened a novel window onto the past and we’re very excited to be able to share the sound with people for the first time in 3,000 years.”

Professor Joann Fletcher, of the Department of Archaeology at the University of York, said: “Ultimately, this innovative interdisciplinary collaboration has given us the unique opportunity to hear the sound of someone long dead by virtue of their soft tissue preservation combined with new developments in technology.

“And while this has wide implications for both healthcare and museum display, its relevance conforms exactly to the ancient Egyptians’ fundamental belief that ‘to speak the name of the dead is to make them live again’.

“So given Nesyamun’s stated desire to have his voice heard in the afterlife in order to live forever, the fulfilment of his beliefs through the recreation of his voice allows us to make direct contact with ancient Egypt by listening to a voice that has not been heard for over 3000 years, preserved through mummification and now restored through this pioneering new technique."

Professor Schofield added: “The voice is such a significant part of being human, and every voice is distinctive.

“As an archaeologist, the opportunity of recreating a voice from the past with greater accuracy than has even been done before was an exciting and unexpected prospect.

“From a heritage experience point of view, the opportunities are immense - to not only look at ancient archaeological remains in a museum or on the ground, for example in Leeds Museum where Nesyamun is displayed or at Karnak in Egypt where he worked as a priest, but to hear the sound of a voice from that period.

“Maybe visitors will also be interested to hear how we did it! Increasingly visitors like to know about the science behind the discoveries.”

The research is published by Nature's Scientific Reports.