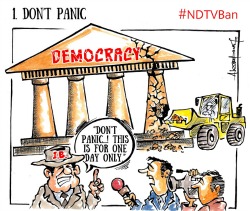 On cartoons, corruption and censorship - in conversation with Aseem Trivedi

Indian cartoonist and human rights defender Aseem Trivedi will be interviewed about his work by the York Press chief feature writer Stephen Lewis. The event is chaired by Dr Alice Nah (CAHR).

Aseem Trivedi is an Indian cartoonist and human rights defender. He played a leading role in India's 2010 anti-corruption movement with his 'Cartoons Against Corruption' series, for which the government suspended Aseem's website and charged him with sedition, breaching the IT Act, and 'insulting' national symbols. Aseem was arrested after launching the Save Your Voice campaign to protest censorship in India. He spent three days in prison and went on hunger strike demanding the government repeal the legislation used to target him and other activists.

In 2015, following years of peaceful activism, India's Supreme Court struck down the legislation under which Aseem was imprisoned. Later that year, he created a comic magazine dedicated to telling the stories of human rights defenders at risk around the world. Today, while the sedition and IT charges have been dropped, Aseem still faces up to three years in prison for 'insulting' the government through his art.

From 1982-1984 he worked as a junior underwriter on the Far East desk in the Government's Export Credits Guarantee Department based in the City of London, where he helped to arrange government insurance for British companies bidding for major capital projects in China and the Philippines.

In 1984, he walked solo from John O'Groats to Land's End, and from 1985 to 1988 worked as a journalist on a group of local newspapers in Gloucestershire.

Between 1988 and 1993 he taught English at two different universities in the People's Republic of China, first in Yunnan Province and then in Hubei Province.

Stephen was Feature Writer of the Year in 2010 and 2012 in the 02 Media Awards for Yorkshire and the Humber.

His interests include history, the history and heritage of York, travel, literature, wildlife, ecology, evolution and the environment.

Stephen is a member of The National Trust, The Yorkshire Wildlife Trust and The National Union of Journalists. He speaks reasonable Mandarin Chinese.

This event is jointly organised by the Centre for Applied Human Rights and Frontline Defenders.