Edwina studied Music at the University of York, after having received the Principal’s Prize for Junior Music at the Guildhall School of Music and Drama in London. During her second year at university she gained an external LRAM in performance and graduated from York in 1981 with a First, the final degree of this class to be awarded by Wilfrid Mellers (the founding professor of the York Music Department). Inspired in particular by her university supervisor, the clarinettist Alan Hacker, Edwina has subsequently pursued a career combining a wide-ranging performance repertoire with the study of historical instruments.

Edwina plays principal flute with Yorkshire Baroque Soloists, the Eighteenth Century Sinfonia, Baroque in the North and Newcastle Baroque, and she features on the recording of Telemann’s complete ‘Tafelmusik’ by the Orchestra of the Golden Age (Naxos). Together with many other York alumni, Edwina can be heard on recordings by Yorkshire Baroque Soloists of Bach’s Mass in B Minor, St John Passion, and the early version of his St Matthew Passion (Signum). On the modern instrument she is a freelance solo, chamber and orchestral flautist. Edwina has recorded for BBC radio and television on baroque, nineteenth-century and modern flutes, and has commissioned and performed several contemporary works for baroque flute.

Edwina combines old and new instruments in The Fairfax Ensemble, a trio of soprano, flute and piano, which regularly performs 18th to 21st century repertoire in venues across the North of England. Recent programmes have included a five-concert tour, funded by the Ralph Vaughan Williams Trust, of newly-written works and 20th century British compositions for the Sounds Lyrical Project (a York-based  collaboration of poets and composers); recitals of romantic repertoire for meetings of the Elgar Society; and two programmes of works written especially for members of the ensemble, for the Late Music concert series.

Edwina teaches modern and baroque flute at the University of York and at York St. John University, also providing specialist baroque tuition and advice for occasional students from other universities in the North of England. She has presented lectures to postgraduate students at the Royal Welsh College of Music, and has acted as a specialist examiner at the Royal Northern College of Music.

In addition to performing and teaching, Edwina is the flute consultant for the Edinburgh University Musical Instrument Collection and has contributed performances to a website demonstrating and describing a number of these instruments. Her catalogue of nearly 300 flutes held by this collection is now in its third edition, and she has revised and enlarged their catalogue of recorders and flageolets. In addition, she has catalogued over a hundred flutes and flageolets in the John Webb Collection at the Royal Conservatoire of Scotland.

Together with Dr Derek McCulloch, Edwina has published an edition of Haydn’s trios for two flutes and cello (Corda Music), incorporating variants found in early nineteenth century sources. She contributed an article on this edition to the Haydn Society Journal, and has recorded two of the trios with the Café Mozart ensemble as part of a CD of works by Haydn and the Earl of Abingdon (Naxos). 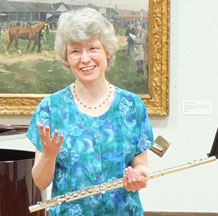