Dave Smyth is a London-based drummer and composer.

Hailing from the Midlands, Dave cut his teeth touring the UK with a successful local rock band before relocating to study music at the University of York. Whilst completing this degree Dave discovered his interest in contemporary British jazz. He was fortunate enough to study under John Taylor, Julian Argüelles and Martin France, before gaining a place on the MA Jazz course at the Royal Academy of Music where he graduated in 2013 with Distinction.

As a leader and sideman he has performed at venues and festivals including the 606 Club, The Vortex, Kings Places, The Forge (Camden), Pizza Express (Dean Street), Manchester Jazz Festival and Huddersfield Contemporary Music Festival, as well as recordings and live broadcasts for BBC Radio 2 and 3.

His octet, Timecraft, featured saxophonist Iain Ballamy for their debut performance and the group toured the UK during the summer of 2013.

Dave became the drum kit tutor at the University of York in 2010 and has been an assistant tutor on the Falmouth-Yamaha Jazz Summer School since 2012. 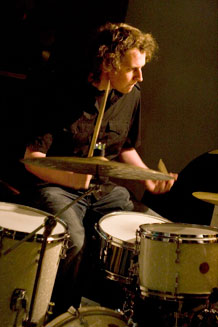