Visit Neil Sorrell's profile on the York Research Database to:

Neil Sorrell obtained a B.A. in Music from the University of Cambridge in 1967, an M.A. in Area Studies (specialising in North Indian music) from the School of Oriental and African Studies, University of London in 1969, and a Ph.D. in Ethnomusicology from Wesleyan University, Middletown, Connecticut in 1980. His doctoral thesis was on Indian music, and he co-authored a book on the subject with his teacher, the great sarangi player, Pandit Ram Narayan. He was the first ethnomusicologist to be appointed to a British university music department (York, 1973). A secondary interest, which has assumed greater importance over the past 25 years, is Javanese gamelan music, which he began studying at Wesleyan University. In 1980 he co-founded the English Gamelan Orchestra, the first group of British musicians dedicated to the study, composition, and performance of music for the Javanese gamelan, and in 1981 he organised the manufacture by Tentrem Sarwanto of York’s Gamelan Sekar Petak, the first complete Javanese gamelan in a British teaching institution. Gamelan Sekar Petak has toured Britain, and also performed in Italy in 1984, and in 1987 gave the first performance of Javanese Wayang Kulit (shadow theatre) accompanied by British gamelan players. In 1993 he supervised the acquisition of a gamelan by La Cité de la Musique in Paris, also made by Tentrem Sarwanto and named Gamelan Sekar Wangi, and he has also taught and performed in Paris. In 1994 he participated, as composer and workshop leader, in the Rhythms of Harmony Festival in Indonesia, which brought together the British percussionist, Evelyn Glennie, and the gamelan musicians of S.T.S.I., Surakarta. He also acquired, in 1989, a set of Thai Pi-Phat instruments for the department.

Neil Sorrell has written, broadcast and lectured around Britain, and also the United States, France, Italy, Switzerland, Sweden, India, and Indonesia, on Indian and Javanese music, providing entries for the Encarta Encylopedias and numerous insert notes for compact disc recordings of Indian music issued by the Nimbus and Navras companies. He has been invited to address conferences in India and also to interview several leading musicians, including Vilayat Khan, Ram Narayan, Hariprasad Chaurasia and Shivkumar Sharma at the Nehru Centre in London, and his interviews with Ravi Shankar and other famous musicians have been published in the Gramophone magazine. 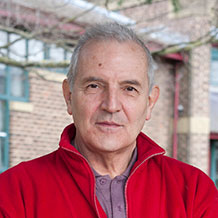