Visit Jonathan Wainwright's profile on the York Research Database to:

Jonathan Wainwright is a musicologist and performer. He has published extensively on English and Italian music of the 16th and 17th centuries, is an editor of scholarly editions and of contemporary English church music, and his CD recordings range from Medieval carols through to Percy Whitlock’s Organ Symphony. He was editor of the Royal Musical Association Research Chronicle from 1994 to 2010.

He was educated at Durham University, the Royal Academy of Music, and St Catharine’s College, Cambridge. From 1989 to 1996 he was a College Lecturer at Oxford and from 1994 to 1996 held a half-time Lectureship at the Open University.

In 1996 he moved to York to take up a joint appointment shared between the Department of Music and York Minster where he was Director of the Girls Choir. He has been full-time at the University since 2001 and was Head of Department from 2007 to 2013. 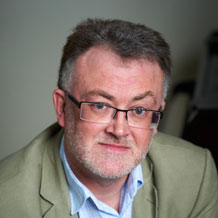