Eight current and ten ex-students of the Music Department (all professional musicians) took part in a spectacular concert of 17th-century multi-choir music at York's National Centre for Early Music.

The singers were joined by one of the world's top early music ensembles, I Fagiolini, along with the English Cornett and Sackbut Ensemble and other players to make up the sort of ensemble that Thomas Coryat wrote about hearing in Venice in his 1608 travelogue, 'Coryat's Crudities'. 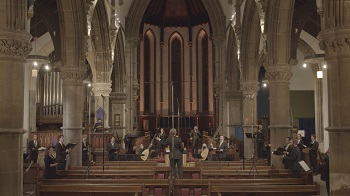 Entitled 'Super Excellent' (after Coryat's description) the music included Giovanni Gabrieli's overwhelming 'In Ecclesiis' as well as part of a Catalunian Battle Mass, a Peruvian 'Dixit Dominus' and the reconstruction of a masque/verse anthem to celebrate the union of England and Scotland ('Great Brittany') on the accession of James I/VI by Edmund Hooper.

It was conceived and conducted by Reader in Music Robert Hollingworth, who has performed similar repertoire at the BBC Proms. "This concert took almost more organising than anything I have ever done! 2m distancing rigorously observed, new editions made, rehearsals despite all the difficulties - but some of the best colleagues and finest players in the business, some of them who hadn't played for months and months. The music is truly overwhelming but so was the occasion, given what we've all been through."

Delma Tomlin MBE (director, NCEM) writes: "What a show! The joint forces of I Fagiolini, ECSE and The 24 completed our online spring festival Awaken in ‘Super Excellent’ style. Musically quite amazing – particularly given all the practical issues about social distancing just now – beautifully introduced and shared with audiences – and such glorious repertory so rarely heard. Well done maestro Hollingworth another triumph to add to the ever-growing list."