Fabulous review in the USA for Thomas Simaku’s new album

"There’s little doubt that Thomas Simaku is a contemporary master. One hopes that his music will get ever wider exposure—for our sake as well as his." 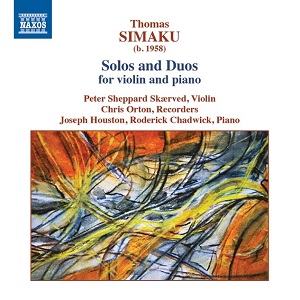 The reviewer, James H. North, begins by saying that it is difficult to compare Thomas Simaku’s music to anything one has heard:

"Whenever we are introduced to a piece of music (old as well as new), a natural reaction is to fit it into our previous   experience, to compare it with music we know. A first description is likely to reference other composers, be they Bach or Stravinsky. Which brings us to Thomas Simaku, a British composer born in Albania in 1958. His music is so original that past experience fails. How can one describe his music? Simaku seems to create his own structure as he goes—the music reeks of impetuosity, as if he were dashing off the notes sequentially. Perhaps he does. An excellent 5,000-word article in Tempo, written by Marin Scheuregger, a former Simaku student with a Ph.D. in music analysis and composition, applies concise analyses to many Simaku works but fails to tell us what to expect, what we will hear. (Tempo 73 (290) pp. 40–50)."

North cites Scheuregger on the composer’s upbringing under the repressive Stalinist regime in Albania, on international modernists and on Simaku’s love of Hungarian composers Ligeti and Kurtág. This leads us to a comparison to Bartok: "Although I cannot cite specific examples, I do get a feeling of Bartók behind Simaku’s music: its intensity, its brilliant character, its sudden variety, its thrusts at virtuosity. Perhaps the connection is amplified by suggestions of Balkan folk music. Scheuregger writes of Simaku’s ever-mounting joy at composing new works; it’s easy to hear that joy in his music." North continues, with individual works: "The playful Signals sparkles with gaiety and wit. Capriccioso challenges the violinist’s chops. My Beautiful Morea is an ancient Albanian folk song; its short melody 'has not been altered, but has been extended, enriched in texture, and presented in different ways.' It is extremely moving." North comments that Simaku’s piece for solo tenor, doubling alto, recorder, Soliloquy V: Flauto Acerbo calls for "extraordinary virtuosity; we could be in a tropical jungle ringing with bird calls and animal cries."

"These appear to be ideal performances; each is played by its dedicatee or its initial performers. Violinist Sheppard Skaerved produced the disc and painted the cover picture. The recordings, made at Simaku’s University of York in 2016, use much reverberation but remain wonderfully lucid and alive." Performing on the disc, alongside Peter Sheppard Skaerved, are pianists Roderick Chadwick and Joseph Houston, and recorder player Chris Orton. The American critic sums up: "There’s little doubt that Thomas Simaku is a contemporary master. One hopes that his music will get ever wider exposure—for our sake as well as his."