Following the reopening of the Department last week to postgraduate performers, this week it was the turn of MA Music Production to begin using the Department's recording studios for the first time since March. 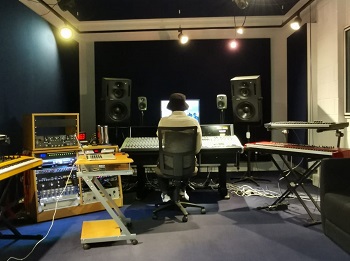 Following a risk assessment and mitigation process undertaken by Studio Manager Ben Eyes in collaboration with the University's Estates and Campus Services team, production work in the Department's studios is now possible with postgraduate students returning to work on items for their final portfolio submission which is due at the beginning of September.

New protocols to ensure that studio work is as safe as possible include thorough cleaning and resting of all equipment between uses, and sufficient time between studio bookings to allow air to be exchanged. The Rymer Auditorium, which has extensive acoustic treatment to reduce reverberation time, is temporarily acting as live room for the studios because of its separate air-conditioning circuit. There are 32 audio tie-lines between the Rymer and the main control room.

The Department has introduced many general measures to make its buildings safe including a one-way system with designated entrances and exits, hand santiser points in every room and single-occupancy kitchens.