Ben Eyes is designing the live sound for a set as the Red Bull Music Festival comes to London for the first time. 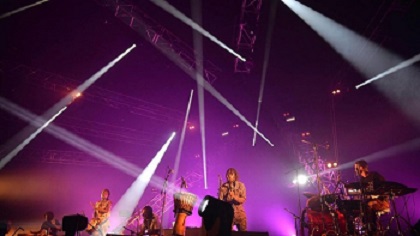 After successfully touring Europe, the Ugandan band Nihiloxica have been personally asked by Aphex Twin to perform alongside him at Printworks, a cutting edge London venue with a capacity of 6,000. The festival sold out in two hours. Ben is responsible for designing Nihiloxica’s monitoring system, live sound and live electronics and is now relishing the large scale production this will entail.

On his exciting new role, Ben, who is so influenced by Aphex Twin that he included a chapter on the musician’s work in his Masters thesis, said: "I worked with Nihiloxica together for the first time on a large performance for Trans Musicales festival in France in Rennes in front of 15,000 people. It was a thrilling experience. The band are a really unique mixture of rapid fire Bugandan poly-rhythms, with four drummers playing multiple bass, small and long drums, analogue synths, effects, delays and a drum kit. I've brought in my experiences of working with live instruments, analogue synths, computers and in-ear monitors in a professional environment with other bands, and I am able to translate what the band want to something that the crowd enjoy.

“Aphex Twin is one of my favourite musicians and he’s a massive inspiration to my own work in electronic music composition and performance. His live shows combine everything I love about electronic music with sections of improvisation, analogue electronic noise and jaw dropping visuals."

Nihiloxica are also recording an album whilst in the UK with Ben's long term music production collaborator Ross Halden, now based in Bradford. The band had been struggling to get the sound of their live performances across using the technology they have access to in Uganda, which Ben and Ross plan to rectify by recording them using modern digital methods combined with high end analogue technology in the form of custom made microphone pre-amps.

On assisting with the recording on Nihiloxica’s new album, Ben said: “I looked at studios across Europe that I thought would be suitable, but I’ve worked with Ross for many years and I love the way he captures drum sounds and the energy of live performances. He was the perfect person for the job."

Find out more about Aphex Twin's set at Printworks