Tempo: The Music of Thomas Simaku 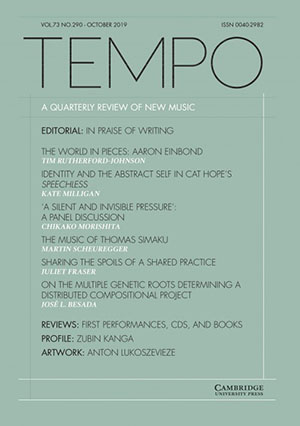 The article discusses a number of works written since the 1990s, focusing on more recent works such as the award-winning pieces Concerto for Orchestra and Soliloquy V – Flauto Acerbo, and the latest works, including The Scream based on Edvard Munch’s iconic painting.

Here is an extract about Thomas Simaku’s influences and themes, in which Dr Martin Scheuregger writes:

"Simaku’s music bears the influence of the two geographical periods in his life and the two corresponding musical frames within which he worked at each time. Balkan – particularly Southern Albanian – folk music was a fundamental early influence, with western modernism coming in to play after moving to the UK in 1991. […] But more common is for features of Simaku’s musical heritage to emerge having been processed through an essentially modernist musical language. Critics have regularly commented on these qualities, including Colin Clarke’s review of the 2008 Naxos release of two of Simaku’s quartets and the first three of his Soliloquy cycle:
The intersection between individual contemporary utterance and region-specific, folk-led expression is explored in all of the works here, but particularly in the quartets. Drones, microtones, heterophony and implied improvisation all inform his work. The influence of traditional musics is incorporated into his expressive vocabulary – there is no use of direct quotation here.

"The composer himself is not coy about his Balkan influences, seeing his music as an attempt to ‘focus on an idiom where ancient and modern aspects of utterance, musical or otherwise, interact and complement each other’ as he ‘[puts] together elements from disparate musical cultures’. Although the result might suggest a more directly modernist influence, understanding the origins of Simaku’s musical language – much of it owing to his time working with musicians in Southern Albania – makes greater sense of his stylistic traits. A more specific study of these influences is needed: here, only the generalised, essential characteristics of this music are observed. The relationship to modernist music is more apparent, although it is more difficult to speak of influence here. The twentieth-century composers mentioned above provide a stylistic and technical grounding through which Simaku has found his own modernist voice. Understanding the twin influences of traditional and radical musics leads to a better understanding of other dualities that are present in this work. Whilst not exhaustive, a set of concepts – each a pair containing inherent tension – provide a route in to rationalising this music: simplicity and complexity, the individual and the group, and stasis and movement. Furthermore, one can observe a fastidious attention to form, a predilection for heterophonic textures, and a tendency towards virtuosic writing. In attempting to better understand Simaku’s music, these themes and concepts play a useful role and may inform future study."