The Autumn 2017 Postgraduate Forum is intended as a welcome to newcomers and a showcase of research by current students. The event reflected the current multifaceted nature of research in Music. Unity was found in this diversity in that so many ideas were concerned with bridging certain boundaries of discipline, venue, musical technique or the fluid role of the researcher.

Practice-based research is the fulcrum of our department’s integration of practical and academic musicianship. Each year we celebrate this unique synthesis through the inclusion of a lecture recital alongside two traditional paper sessions and a composition workshop. This year’s performance component was delivered by PhD candidate and drum set percussionist Beau Stocker, whose research combines the exploration of East African Rhythms, drum set timbre and live electronics.

Through the use of recorded examples and a live performance innervated by electronic devices, Beau demonstrated how the rhythmic features of traditional South Sudanese music can be of structural import to the exploration of drum set sounds in an improvised musical setting. The audience’s introduction to the rhythmic cue systems used in East African drumming and the processes of their structural ‘translation’ was accessible and thought provoking; further questions concerning percussive timbres were raised by students and staff members who made up the large and diverse audience in the Rymer Auditorium. Supportive chairing was provided throughout by fellow practice-as-research PhD candidate Carmen Troncoso, while our in-house sound engineer Lynette Quek was on hand to provide steadfast audio and tech assistance. 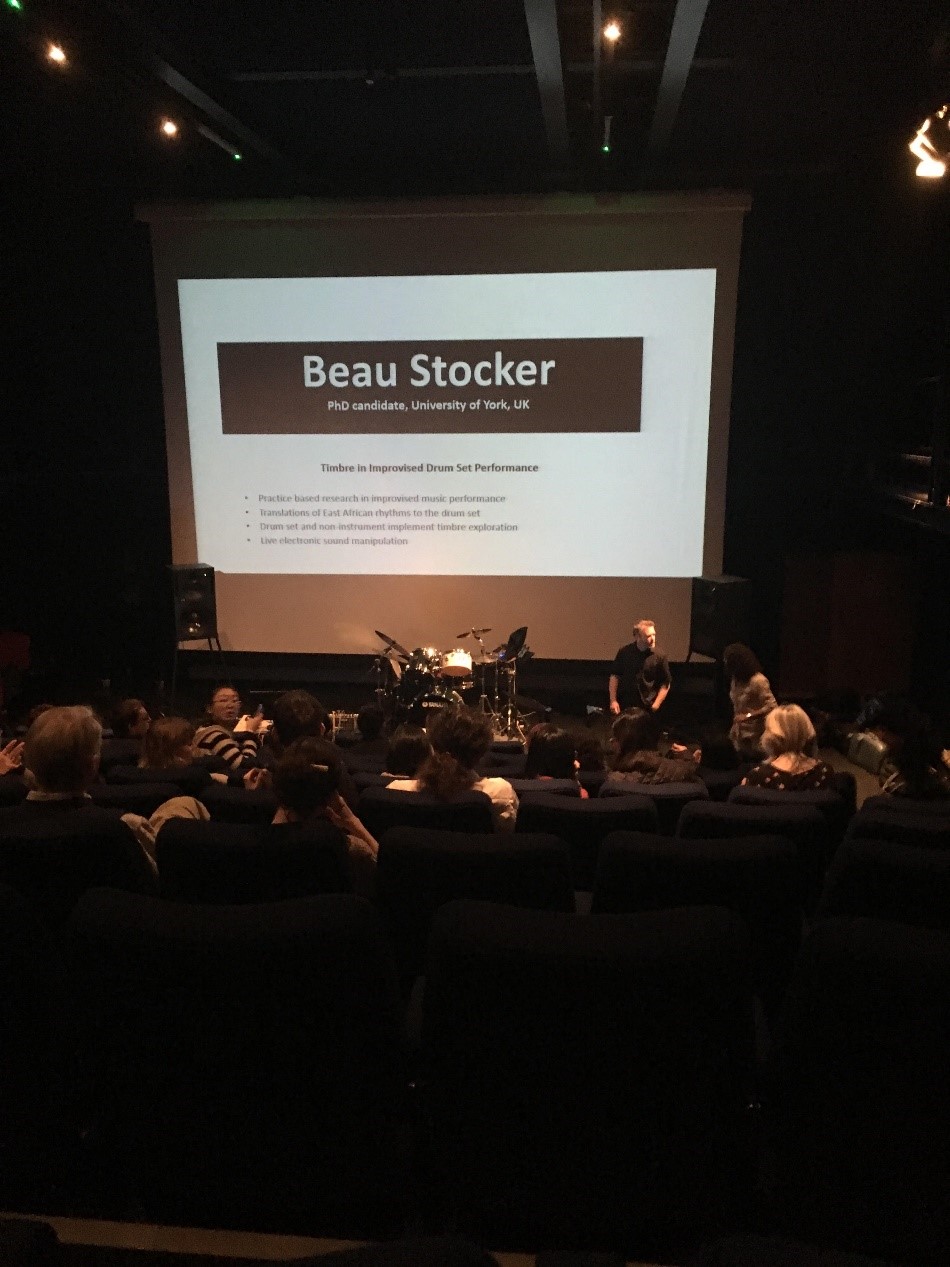 The first paper session was chaired by Catherine Fahy and featured three papers from MA and PhD students from across the department. Second year PhD candidate and ethnomusicologist Helen Diggle launched proceedings. Helen’s research concerns the reimagining of ancient sound worlds in contemporary Northern European Folk Music. For her second appearance at the music postgraduate forum, Helen delivered a paper focused specifically on the Sámi vocal tradition of Joik and the development of its communicative status since the 1970 Sámi folk culture revival. It was inspiring to see how Helen’s research has developed over a year and how adeptly she traversed the semantic, aesthetic and sociological considerations raised by the interview based evidence she gathered on her recent fieldtrips to Sápmi. Throughout her presentation the audience were introduced to numerous exponents of Joik such as Nils-Aslak Valkeapaa, which provided a much appreciated window onto Sámi folk culture.

Continuing the theme of bridging communicative boundaries, James Redelinghuys’s bold paper‘African eyes/African-ize/African Ass’ reflected on his recent linguistically occupied composition “It isn’t a noise…”. Guiding the audience through the complex issues of musical and cultural appropriation, James shared the impetus behind creating a ‘celebration’ of Nguni click consonants. A considerate discussion of previous western musical recourses to African culture, as well as the role of his south-African heritage in informing his compositional choices, made for a thoughtful reflection on the complexity on personal and national identity and its imbrication in creative practice. 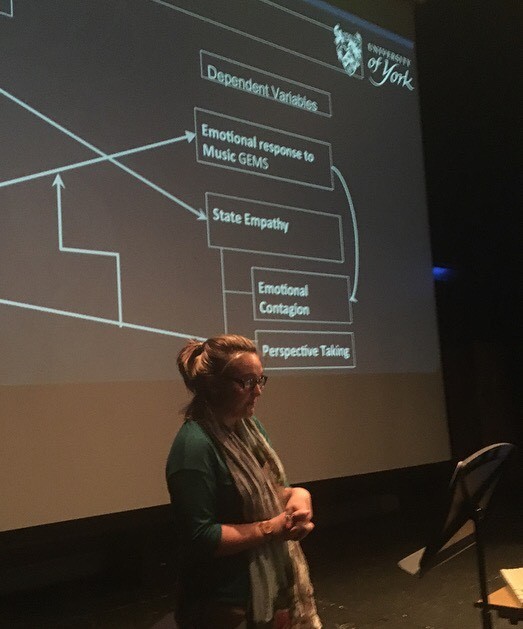 Representing the music psychology pathway of the MA in Music course, Katherine O’Neil closed the paper session with a report on her investigation into the effect of induced empathy on subjective responses to music. Katherine reflected on the complex design process of her study and the challenges of establishing the first empirical test of situational empathy; this also provided an informative introduction to scientific theories of emotive responses to music for many of the audience. The use of textual stimuli and the question of their construction provided an intriguing post-paper discussion point. We look forward to Katherine’s contribution at future forums as she will be soon joining the York Psychology Group as a PhD student.

Over in the Sir Jack Lyons Concert Hall, Dr Martin Suckling chaired the Composition Workshop, which featured four composers and four extremely different pieces of music to boot. The focused but relaxed atmosphere offered those involved a live audience and a discussion platform environment, led by Martin. 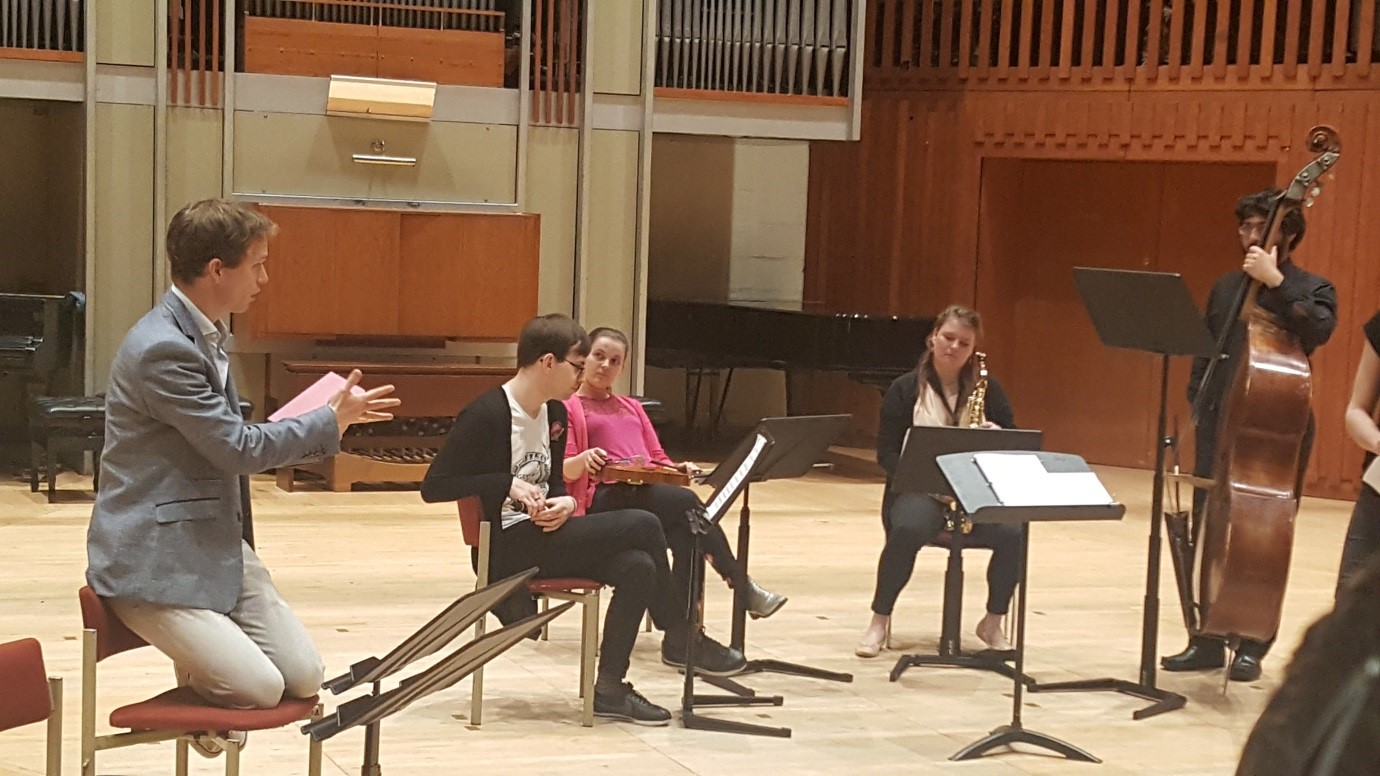 Liv 10 Anos by Carlo Estolano (PhD composer and guitarist) was taken from his PhD project Chamber Jazz and explored incorporations of jazz, improvisation and modal scales, combined with aspects of renaissance style. The emphasis on complex syncopation and Jazz harmonies brought across with convincing energy the creative potential in including aspects of Jazz-inspired improvisation within a contemporary composition context. Alongside Carlo featured Jenni Cohen (flute) and Carmen Troncoso on (multiple) recorders.

Masters student Catherine Robson was next with her piece Work Sets You Free for clarinet (James Redelinghuys), alto saxophone (Katie Wood), viola (Angelika Stangl) and double bass (Adam Thomas). An uncompromisingly aggressive and rhythmic musical response to the current European and American political landscapes, this exciting piece threw up a deeper discussion of how music might express subjective, political reactions.

Meanwhile, Shu-Yu Lin’s experimental String Quartet was built around a montage of ‘instrumental sound objects’ which appear, develop and merge into each other, combining aspects of acoustic and electronic compositional sounds.

Thanks to Lynnete Quek, this composition workshop has been recorded in its entirety.

The diversity continued in the afternoon paper session, chaired by Owen Burton. Neil Luck (PhD student) reported on his involvement in an exciting, large and cross-disciplinary project, Operatic Mass Actions, based in Aarhus, Denmark. Neil outlined the ways in which he and five other different artists went about producing music-theatre work that transcends common boundaries of performance, taking the work onto the city’s streets. 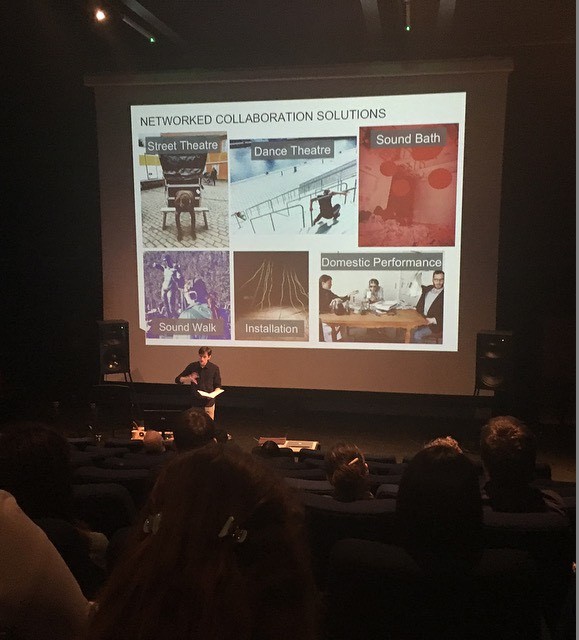 We are proud that the University of York is a leading exponent of Community Music as a fast-growing field of study. A paper by part-time MA student Lizzie Kirk, arguing for a dialogic approach between theory and practice in Community Music, therefore struck an appropriate chord as a rigorous introduction to her own research experiences and the current landscape of Community Music in higher education.

PhD student Bella Clifford rounded off the session with an exploration of the violin ban on women at the turn of the Eighteenth-Nineteenth Centuries, delving further, for example, into nineteenth-century attitudes to virtuosity and social conventions and how these shaped this prohibition.

We were delighted to welcome Dr Keith Allen from the Department of Philosophy who came along to judge the Poster Competition. First prize was awarded to PhD composer Oliver Pickup for his striking poster on how performer layout in physical space can affect the listener’s perception.

Special mentions went to Samantha Holland (MA Music Research) for her poster on the value of archival research to understand the mind of the composer African-American composer Florence Prince; Diana Kayser (incoming PhD student), for her submission on what facial expressions can reveal about experienced emotions in music, and PhD student Claire McGinn, for the outline of her work concerning the English-language representations of music from the Baltic states. 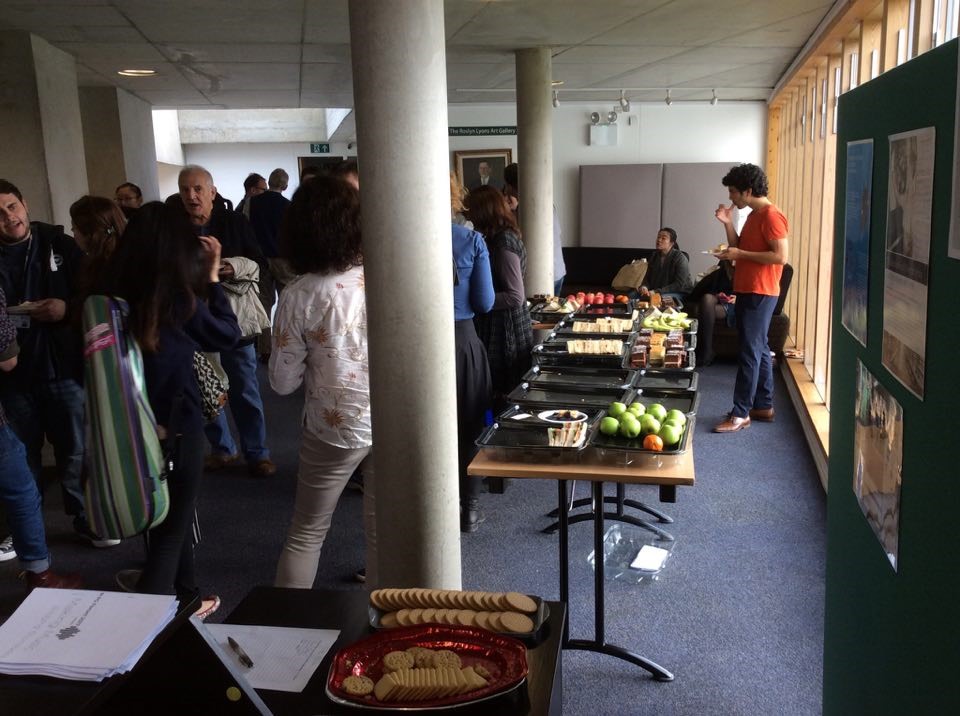 We would like to thank everyone involved for all their hard work, and for communicating their research with clarity and enthusiasm. Finally, thanks to the many people who attended and contributed to the discourse and general enjoyment of the day. 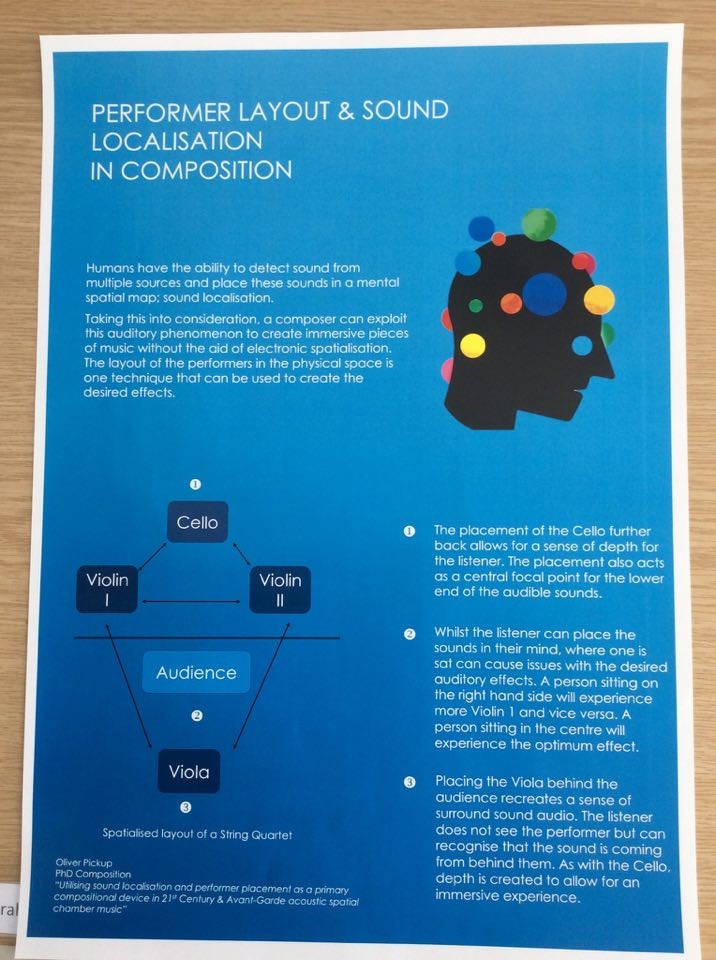 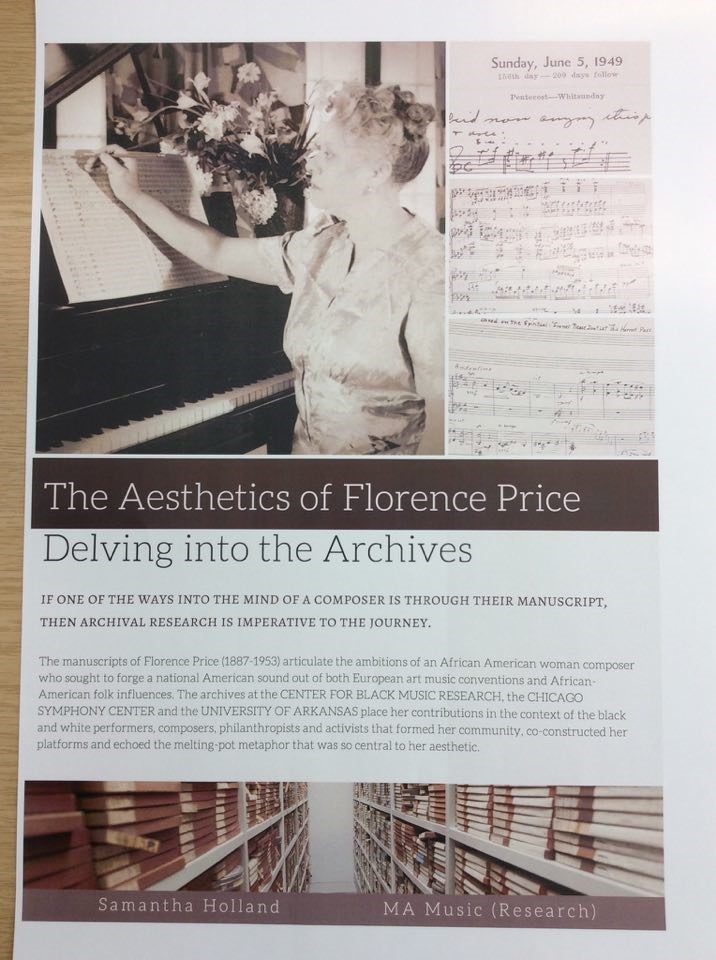 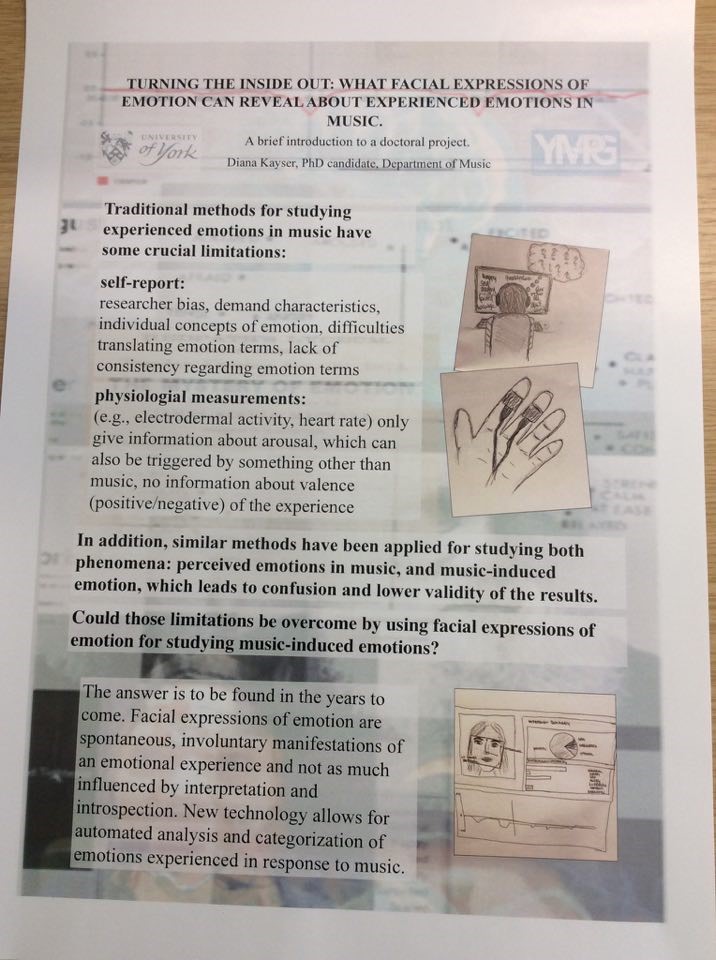 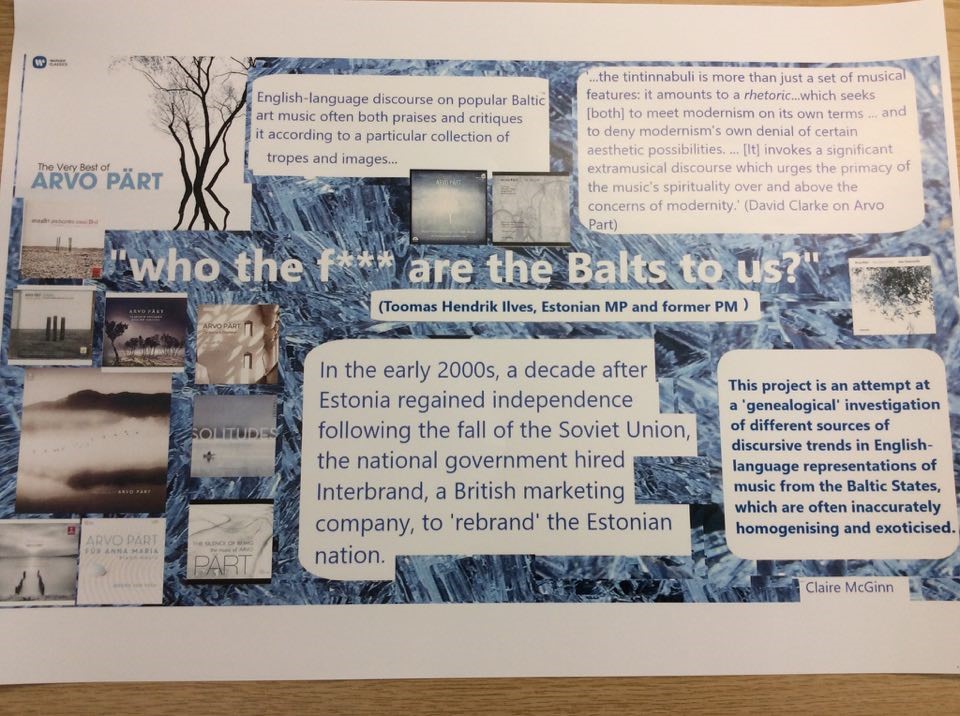