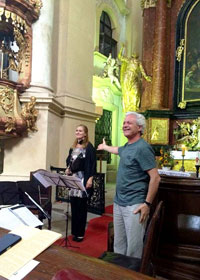 The piece is based on a Czech baroque melody, Herkommann Aria, which serves as a ‘point of departure’; its character and salient intervallic properties are ‘freely elaborated into a textural format that focuses on the lyrical and echoes the remote atmosphere of the ancient melody’.

The work was performed by Lorina Vallaster, who gave the Austrian premiere at Vienna Concert Hall, Schubert-Saal, in 2015. Commissioned by Christopher Orton and the BBC Performing Arts Fund, the world premiere was given at the Greenwich International Early Music Festival in 2008.