On Sunday 5 June 2016 at 1pm, Robert Hollingworth (Reader in Music in the Department) presents the BBC Radio 3 Early Music Show. 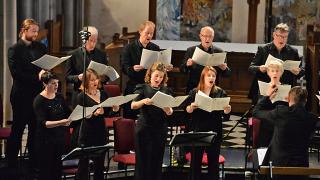 The subject of the show is the Medici Codex, a 1518 wedding gift/diplomatic present from the Medici Pope Leo X to Lorenzo, Duke or Urbino, and Marguerite de la Tour d'Auvergne. The codex contains over 50 motets by well-known composers such as Josquin, Mouton and Willaert, but also enigmas like Elimot.

The volume itself tells the political story of Rome's relationship with France in the 1510s and is teased out in interview with Dr Tim Shephard of the University of Sheffield.

The show will feature performances specially recorded by the BBC Singers conducted by Robert Hollingworth.

The programme will also be available on demand after broadcast on the BBC iPlayer.