The 30th anniversary conference of the Association of British Choral Directors took place in August, with department choir The 24 featured as one of three choirs (one from Russia, the other a teenage boys choir) performing at a special gala concert at the Royal Northern College of Music. 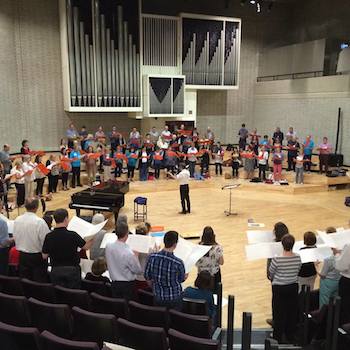 The 24's conductor, Anniversary Reader in Music Robert Hollingworth reportsm "Performing to an entire hall of conductors might have been daunting but the group won a long ovation at the end of its sophisticated performance of Leighton, Gombert, Richard Rodney Bennett, Adrian Williams and Brahms."

Robert then ran a session on Tallis's 40-voice motet Spem in alium for all delegates and members of The 24 to close the conference.  Hollingworth previously won a Gramophone award in 2011 for his recording of 'Spem' with voices and instruments.