Robert Hollingworth and four music students appeared live on BBC Radio 3's In Tune to discuss the unique MA in Solo-Voice Ensemble singing and a new Gesualdo project with I Fagiolini. 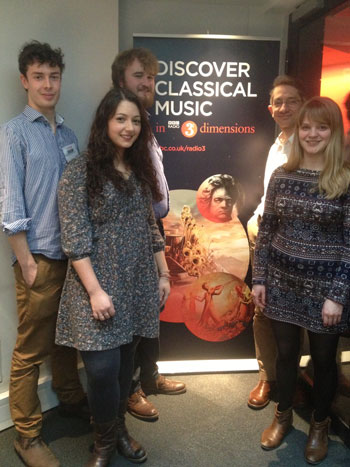 ‌Department Ensemble-in-Assocation I Fagiolini's new BETRAYAL project is a Barbican centre and Arts Council England-commissioned show for six singers and six contemporary dancers.  It will take place in May and June 2015, with twelve shows in London, Cambridge and Salisbury.  As part of this, Robert Hollingworth (director of I Fagiolini and Reader in Music, University of York) as well as singers from the I Fagiolini project have been working with two current students and two connected with the Masters in Solo-Voice Ensemble Singing run by Hollingworth at the University of York.

You can listen to the episode of In Tune on BBC iPlayer.