Martin Scheuregger has been Embedded Composer-in-Residence at the British Music Collection, supported by a Sound and Music residency. 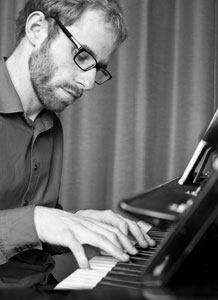 Since beginning this project in 2014, Martin has seen The Collection move to a brand new purpose-built facility, Heritage Quay. As the culmination of this residency, Martin is collaborating with contemporary music group CHROMA to curate concerts at the Camden Forge on 11 November 2015, and at Huddersfield Contemporary Music Festival on 23 November 2015.

In London the programme will include works from the British Music Collection that reflect Martin's compositional interests:

Philip Cashian’s Horn Trio was the first work I seriously looked at in the Collection, writing about it early on in the residency for Classical Music Magazine: I think something of this work’s energy and focus can be heard in my own. In contrast, I came to know Helen Grime’s music much more recently, and being able to programme a relatively recent work of hers – Snow and Snow – shows the continued impact the Collection has for me.

Sadie Harrison’s work is always surprising, each work different to the next and featuring contrast as a strong element of its character. The Bride's Journey in Three Songs and a Memory is an evocative work that showcases this (and what a great title). I discovered Anthony Powers’ music midway through the residency, programming other works of his with my own ensemble, Dark Inventions. In Sunlight opens the door into a bright, sonorous world that characterises much of his work and has influenced a few works of mine over the last few years.

Together, these works represent a mere snapshot of what I’ve found in the Collection but reflect some of the themes and sounds I’ve taken away from this residency.

When I first approached CHROMA, we discussed work they were already undertaking: their commissioning of David Gorton fitted so well with the aims of these concerts, and to have a word premiere alongside the premiere of my own piece was a great opportunity and takes my work with the Collection right into the present day. Taking the interesting instrumentation of Burgh Castle as a starting point(string trio, clarinet, accordion, horn, piano), I’ve been able to create a substantial new work of my own and draw on just a few strands of the amazing work that the British Music Collection represents.