Simultaneous premieres across the globe for Thomas Simaku

Thomas Simaku’s work for solo piano The Flight of the Eagle received its Chinese premiere in Beijing, performed by York alumnus Joseph Houston as part of the ‘International Music Week’ at Beijing Normal University on 26 November 2014. On the same day, his new work for solo violin, Capriccioso, written for and dedicated to Peter Sheppard-Skærved, received its world premiere at King’s Place in London, as part of a concert organised by the Albanian Embassy in London. 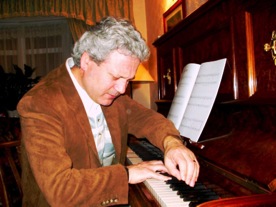 Dr Simaku writes: "The idea for Flight of the Eagle sprang from an ancient Albanian proverb, ‘The Eagle flies in the Sky, but makes its nest on Earth’. Although in no way programmatic, the music, amidst obstacles of varying degrees, alternates between flying and floating, and it is not until the end of the piece that the flight really takes off.  It was obvious to me that this flight could be only for piano, and virtuosity here is very much part of the musical content, as are the rich sonorities of the instrument. In this context, the piece is part of a cycle of solo works – all of which aim towards a thorough exploration of the technical potentiality and the expressive qualities of their respective instruments. 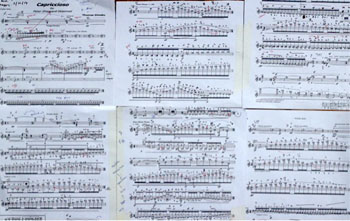 "Capriccioso for Solo Violin was written in 2014, this work focuses exclusively on a single note - the drone? This particular sonority, ison, is ubiquitously present throughout the piece; not only does the music begin and end with it, but its echo is felt even when the actual sound is not heard! But it is always there in the background and it serves as a nucleus with a gravitational sonic power, around which the identity of the music is displayed.  The title alludes to the genre of capriccio, in terms of both its free formal design and the overall character of the music, which invariably consists of rhythmic gestures with a high degree of virtuosity. And who better than its dedicatee, with whom I have collaborated for a number of years now, could give all these and much more!"

On his China visit, Dr Thomas Simaku gave a series of lectures and masterclasses in Hong Kong and Beijing, starting with a presentation on his recent works at the Chinese University of Hong Kong on 21 November 2014. In this lecture Simaku talked about the genesis and processes involved in his Soliloquy Cycle, including his BASCA award-winning piece Soliloquy V – Flauto Acerbo for recorders. On 24 November he gave a composition masterclass at the University of Hong Kong.