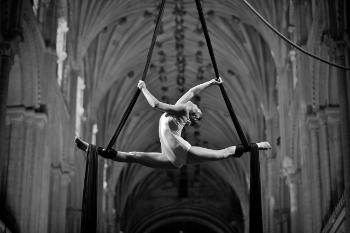 This amazing collaboration between eight voices and circus set in religious buildings was premiered at the Perth International Festival before two years of performances in UK cathedrals. You can watch a short teaser video on YouTube as well as audience reaction to previous performances.
I Fagiolini recently opened the York Concerts series on 8 October 2014 in a lively evening recreating Venetian Carnival life (Pictures at www.facebook.com/ifagiolini).  Later this autumn I Fagiolini are premiering a new programme called 'The Monteverdi Influence' at the Greenwich International Early Music Festival.
I Fagiolini are an ensemble-in-association with the Department of Music at the University of York.