Jonathan Eato was joined by master drummer Louis Moholo-Moholo and Hazel Miller (Ogun Records) for a panel discussion entitled ‘South Africa 20 years on and the legacy of the Blue Notes’; the event was chaired by Jane Cornwell of the London Evening Standard and held at the Southbank Centre on Saturday 15 November 2014. 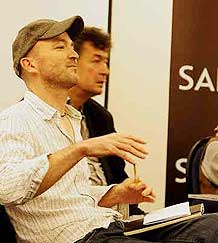 Attracting wide media interest the panel was filmed by a television crew from the SABC (South African Broadcasting Corporation) and was covered by the Mail & Guardian newspaper.

Louis Moholo-Moholo recently visited the Department of Music with pianist Alex Hawkins for a concert on 3 November in the Rymer Auditorium, and the University of York Jazz Orchestra will perform music by the Dedication Orchestra at their summer concert on 10 June 2015 at the National Centre for Early Music.