Tony Myatt and Oliver Larkin held a two day workshop about spatial sound composition at the Akademie der Bildenden Künste, Vienna on the 3rd and 4th March. The workshop was attended by artists who have been commissioned to create new works for the forthcoming exhibition of The Morning Line, which opens in Schwarzenbergplatz, Vienna on the 7th June 2011. 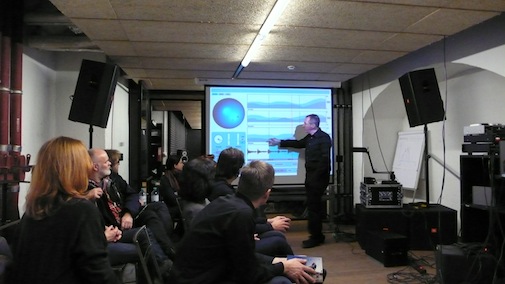 The process of creating new Morning Line works begins with workshops and demonstrations for the artists and composers who learn about the project and its unique spatial sound system. The workshop also begins the dialogue with the York team that will collaborate and support the development of each new work as it's created. The Vienna 2011 Workshop was attended by Carsten Nicolai (De), Christian Fennesz (AT), Finnbogi Petursson (IS), Petteri Nisunen (FI) and Franz Pomassl (AT), along with members of the commissioning and coordinating organisation T-B A 21, including their head curator Daniela Zyman and founder and director Francesca von Habsburg. 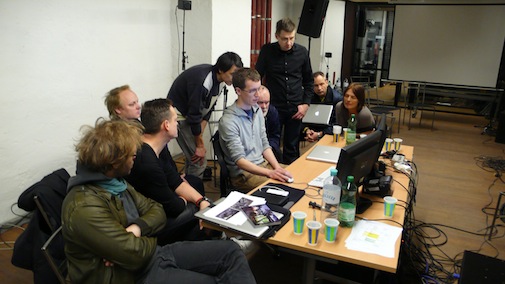 The workshop focussed on ideas related to Myatt's concept of multi-spatial sound presentation, compositional techniques for effective surround sound and the use of a series of software programs. 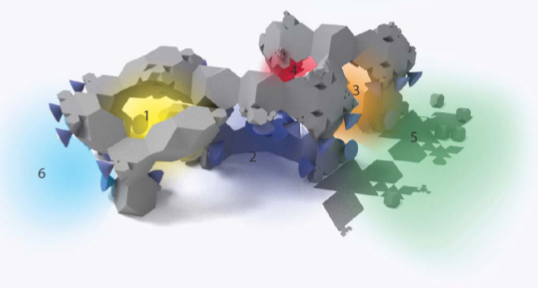 A team of MRC programmers created multi-spatial authoring tools and methodologies, initially for The Morning Line's first exhibition at the 2008 Seville Biennial of Contemporary Art. These tools have been developed and refined over the years responding to their use by composers. In addition to these authoring tools there is a multi-spatial performance engine that controls sound mixing, localisation and movement of sound materials in real time as they are played on the sculpture. This software also controls exhibition sequences and schedules.

The Morning Line is a large-scale, outdoor public sculpture, populated with forty seven loudspeakers. Following the Seville Biennial, the work was shown at the Andalusian Centre for Contemporary Art, and in Eminönü Square, Istanbul last year as part of the European City of Culture celebrations. 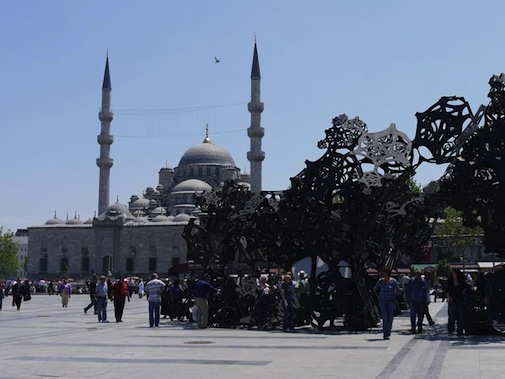 The Morning Line in Eminönü Square, Istanbul during the European City of Culture 2010.
(Photo: Tony Myatt)

The Morning Line was conceived as a collaborative project by New York based artist Matthew Ritchie, who along with architects Aranda/Lasch and Arup Advanced Geometry Unit worked with Tony to configure and create this unique platform for contemporary electronic music and sound art.

Commissioning organisation Thyssen-Bornemisza Contemporary Art (T-B A21), who supported the development of the system, have continued to commission leading electronic music artists to create new works for the project. By the time of the Vienna opening twenty four new works will have been created and developed in collaboration with the Music Research Centre team.

“The Morning Line could be the architectural manifestation of one of Ligeti's micropolyphonic symphonies: his idea of harmonic fluidity, liquid structures, sonic mists and constant flux is manifested...his vision fits this sound-producing walk-through sculpture perfectly” Anne Hilde Neset, The Wire, August 2010.

The Vienna 2011 exhibition will run until the Autumn and will open on the 7th with a music festival from 8th-11th June featuring many of the artists who have been commissioned since 2008.