MRC Director Tony Myatt and Research Support Programmer Oliver Larkin were interviewed about their work on The Morning Line for the Cycling74 website.

The Morning Line is a large scale public art project with a 53 speaker sound system inside. It's currently installed in Schwarzenbergplatz, Vienna until November 2011 and has previously been in Seville (2008/9) and Istanbul (2010).

Cycling74 make MaxMSP - the media programming software that the MRC team used to develop the software that controls the sound system and facilitates the creation of "multi-spatial" audio works for the Morning Line. The interview is in two parts and covers how the team used MaxMSP, their work with some of the world's top sound artists, and how they approached spatial audio on the Morning Line project.

Read the interview on the Cycling74 website  part 1 part2 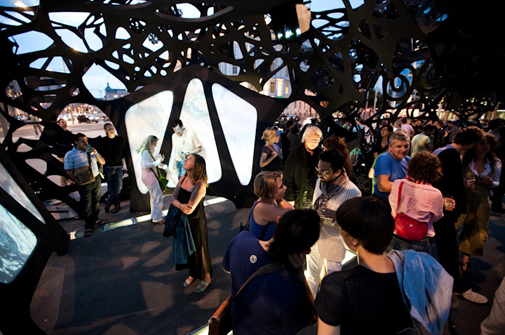