A Workshop on the Sainte Chapelle (Paris) 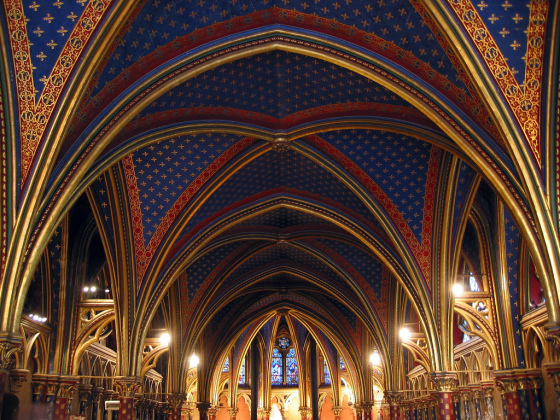 The Sainte-Chapelle is a royal chapel within the medieval Palais de la Cité in Paris. It was commissioned by King Louis IX of France (1214-1270) to house his collection of Passion relics, including the Crown of Thorns. The Sainte-Chapelle is one of the earliest surviving buildings of the Capetian royal palace on the Île de la Cité and is famed for its Gothic architecture and stained glass.

This workshop will feature two papers examining the liturgy and the stained glass of the Sainte-Chapelle in its thirteenth-century context:

M. Cecilia Gaposchkin (Dartmouth College): ‘Salvation and Judgment in the Liturgy of the Sainte-Chapelle’

Emily Guerry (University of Kent): ‘A New Son of Man: Sheep, Goats, and the King of Kings in French Gothic Iconography’

Our speakers are two of the most exciting scholars working on the Sainte Chapelle, liturgy, religious devotion and stained glass:

Cecilia Gaposchkin (Dartmouth College) has published on the crusades and on the Capetian monarchy, and is currently working on liturgy and ceremony in thirteenth-century Paris. Her most recent book is on how liturgy and church ritual underwrote holy war and crusading: Invisible Weapons: Liturgy and the Making of Crusade Ideology (Cornell UP, 2017). She is also the author of The Making of Saint Louis (IX) of France: Kingship, Sanctity and Crusade in the Later Middle Ages (Cornell UP, 2008), Blessed Louis, The Most Glorious of Kings: Texts relating to the Cult of Saint Louis of France (Notre Dame: 2012; translations done with Phyllis Katz), and, with Sean Field and Larry Field, The Sanctity of Louis IX: Early Lives of Saint Louis by Geoffrey of Beaulieu and William of Chartres (Cornell UP: 2014).

Emily Guerry (University of Kent) works on the relationship between religious devotion and artistic representation in the Middle Ages and is particularly interested in how the veneration of relics influenced Christian iconography. She is the author of Crowning Paris: King Louis IX, Archbishop Cornut, and the Translation of the Crown of Thorns (Transactions of the American Philosophical Society, 2016) and will publish The wall paintings of the Sainte-Chapelle: Passion, Devotion, and the Gothic Imagination (Harvey Miller, 2018).