Professor Reidun Twarock has received two awards for her work in Mathematical Virology. 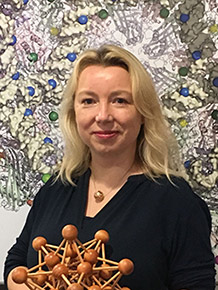 Professor Reidun Twarock, from the Departments of Mathematics and Biology, has been awarded both the 2018 Gold Medal of the Institute of Mathematics and its Applications (IMA) and a Royal Society Wolfson Fellowship for her work in Mathematical Virology.

The mathematical approach which Professor Twarock has developed, alongside lab scientist Professor Peter Stockley of the University of Leeds, played a key role in the discovery of a virus assembly mechanism that changed the existing paradigm and has opened up novel opportunities in anti-viral therapies and vaccination.

“Reidun Twarock joins an eminent list of IMA Gold Medal winners for her world-renowned and sustained contributions to mathematics and its applications. Her work is an inspiring example of how novel mathematical thinking can affect the lives of ordinary people.”

The Royal Society Wolfson Fellowship is jointly funded by the Royal Society and the Wolfson Foundation. This scheme aims to strengthen research in the UK’s best university departments and research institutions and to provide flexible funding to excellent research leaders to conduct high-quality research.

Reidun joined the University of York in 2005 and is part of the York Cross-disciplinary Centre for Systems Analysis (YCCSA), a community of researchers drawn from different departments developing novel mathematical, computational and analytical methods and tools for the analysis and modelling of complex systems.