In the context of general relativity, a singularity is defined as a boundary point of spacetime beyond which no extension is possible, and a singularity theorem is a proof that singularities are inevitable under certain conditions. Although singularities were discovered early in the history of general relativity in solutions to Einstein’s field equations, the question of whether singularities occur in the physical universe (e.g., inside black holes or at the big bang) remains open and continues to intrigue both mathematicians and physicists. This is because our current understanding of physical law breaks down at singularities, particularly if the energy density diverges as may have happened in the Big Bang. Thus, work on singularities can help answer questions on the origin of our Universe and give insights into a complete theory that would unify gravity with other forces. The recent observation of gravitational waves from a system of binary black holes by LIGO, the most direct evidence for the existence of these exotic objects to date, makes questions about the nature of black holes particularly timely.

Fifty years ago, Hawking and Penrose developed the first general, model independent, singularity theorems in classical General Relativity. These theorems showed that singularities exist, and will be encountered by timelike geodesics (Hawking) or null geodesics (Penrose), in any spacetime that satisfies certain properties. Some of these properties are mild assumptions on spacetime geometry but others depend on matter content and are more problematic. These energy conditions are inequalities on the stress-energy tensor. For example, the Weak Energy Condition (WEC) requires that energy density in all inertial frames is nonnegative at all spacetime points, and the Null Energy Condition (used by Penrose) states the same for the null contracted stress-energy tensor. Hawking used a related Strong Energy Condition (SEC). Such pointwise energy conditions have also been used to rule out a variety of exotic phenomena such as superluminal travel, wormholes and closed timelike curves. 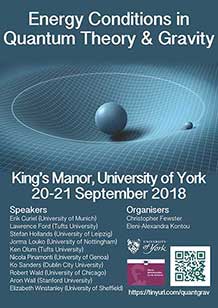 Although pointwise energy conditions are satisfied by many classical models of matter, quantised matter as described by quantum field theory (QFT) allows states that violate them. A well-known example is the Casimir effect in which negative energy densities appear, violating the WEC. Indeed no QFT (free or interacting) can satisfy any of the pointwise energy conditions for all states, and even local averages of the stress-energy tensor must admit negative expectation values.

Because the pointwise energy conditions of the singularity theorems do not necessarily hold for quantized matter, it is necessary to consider weaker restrictions. In past decades, a great deal of work has been done on this subject. For the most part pointwise energy conditions are replaced by averaged energy conditions, which provide bounds on the average of stress-energy tensor along an entire geodesic (sometimes future or past complete). For example the Averaged Null Energy Condition (ANEC) bounds the integral of the null projected stress energy tensor along a null geodesic, and has been used to prove generalised versions of the singularity theorems.

Most existing proofs of ANEC in QFT apply only to free fields (e.g., the minimally coupled scalar field) in spacetimes that are flat or have bounded curvature in the vicinity of the null geodesic concerned (which is also subject to further conditions). Often, ANEC is obtained as a limit of Quantum Energy Inequalities (QEIs) also called Quantum Inequalities, which are lower bounds on local weighted averages of the stress-energy tensor. To date there were no singularity theorems that had existing QEIs as their hypothesis or any singularity theorems obeyed by quantum fields. The main overarching goal of the research project was to establish mathematically rigorous singularity theorems for quantized matter fields.

We have proved a Hawking-type singularity theorem for the Einstein-Klein-Gordon theory in which the SEC can be violated, thus preventing the use of Hawking's original theorem. We first derived lower bounds on local averages of the EED for solutions to the Klein–Gordon equation, allowing nonzero mass and nonminimal coupling to the scalar curvature. Using methods developed byFewster and Galloway, these lower bounds were applied to prove the singularity theorem asserting that solutions with sufficient initial contraction at a compact Cauchy surface will be future timelike geodesically incomplete. The required initial contraction was calculated for cosmological applications. These results were published in General Relativity and Gravitation in a joint publication of the ER, the supervisor and University of York PhD student Peter J. Brown.  DOI: 10.1007/s10714-018-2446-5

We have derived a general and mathematically rigorous quantum strong energy inequality (QSEI) for nonminimally coupled scalar fields. Specifically difference QSEIs were derived, in which the local average of the EED is normal-ordered relative to a reference state, and averaging occurs over both timelike geodesics and spacetime volumes. As anticipated the resulting QSEIs turned out to depend on the state of interest. The state-dependence of these bounds in Minkowski spacetime for thermal (KMS) states was analyzed, and it was shown that the lower bounds grow more slowly in magnitude than the EED itself as temperature increases. The lower bounds are therefore of lower energetic order than the EED, and qualify as nontrivial state-dependent QEIs. These results were published in Physical Review D  in a joint publication of the ER and the supervisor. DOI: 10.1103/PhysRevD.99.045001

We have developed a new method of proving singularity theorems with weakened energy conditions that avoids the Raychaudhuri equation but instead makes use of index form methods. These results improve over existing methods and can be applied to hypotheses inspired by QEIs. In that case, quantitative estimates of the initial conditions required for our singularity theorems to apply were made. This joint work of the ER and the supervisor has appeared as a pre-print and was recently submitted for publication to  Classical and Quantum Gravity. e-Print: arXiv:1907.13604

Finally, we have made progress towards the first derivation of a semiclassical singularity theorem. This combines the methods of part 3 with the QSEI bound of part 2, approximating the bound by its flat spacetime version over sufficiently small scales. This joint work of the ER and the supervisor is still in progress but expected to appear as a pre-print in the near future.

Parts 1,2 and 4 of the project were summarized in the 15th Marcel Grossman conference proceedings that has appeared in a pre-print form and is expected to be published soon. e-Print: arXiv:1904.00419

To disseminate the results of the fellowship to a wider audience the ER and supervisor participated in large scale public events.

The Festival of Ideas in York is a popular festival featuring over 150 events every year including a wide range of public talks from experts. The event “Travels in time” was coordinated by the ER who found suitable co-speakers and took a leading role in planning the joint presentation. The event included presentations from the ER, the supervisor, and two historians of science from the University of York as well as discussion with the audience. Ideas of time, paradoxes, and wormholes were discussed and the audience learned how time travel is approached in both physics and popular science fiction. The event was highly successful with over 160 attendees and positive feedback.

“Pint of Science” is a worldwide science festival which brings researchers to local pubs to present their scientific discoveries. The ER presented a talk titled “Can we create wormholes using quantum fields?”. Exotic spacetimes with wormholes, negative energy and how we can create it were discussed as well as the limitations imposed by quantum field theory. The event sold out and received highly positive feedback.

The supervisor was an invited speaker at the event “Transgressing Boundaries in Science Fiction” at the Maison Francaise, University of Oxford (April 2019). This was a joint talk with Prof R Lehoucq (a distinguished astrophysicist and writer) and an extended question-and-answer session with the participants, mainly historians of ideas and literary scholars. The supervisor’s invitation stemmed from the “Festival of Ideas” talk and covered some of the same topics.