The open access press founded by the universities of York, Sheffield and Leeds, has released Oysters, nightingales and cooking pots: selected poetry and prose of Tristan Corbière. 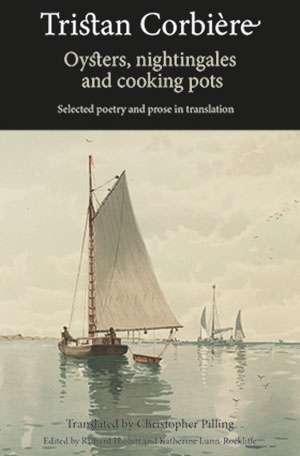 White Rose University Press is very pleased to announce the publication of Oysters, nightingales and cooking pots: selected poetry and prose of Tristan Corbière translated by Christopher Pilling, and edited by Richard Hibbitt and Katherine Lunn-Rockliffe. It offers, for the first time in English, some unpublished poems, early versions of published poems, and a collection of prose pieces, all of which testify to Corbière’s sly humour, linguistic glee, and irony.

A bilingual edition, including the original French with English translations, this volume complements Pilling’s 1995 translation of Les Amours jaunes. Taken alongside that volume, it makes Corbière’s complete works available in English for the first time.

Born in Brittany in 1845, Corbière died at only 29, leaving a scattered assortment of texts. Playful and comic, his work is also experimental, subversive and moving. Combining descriptions of his native Brittany and the urban wilderness of Paris, with witty introspection he builds a kaleidoscopic view of the world. Although a contemporary of Rimbaud and Mallarmé, Corbière wrote very much in isolation, developing his own idiosyncratic style. Almost unnoticed in his own lifetime, his ironic wit was championed by Ezra Pound and T.S. Eliot, and his influence in the English-speaking world has arguably been at least as important as in France.

Christopher Pilling is an award-winning poet, playwright and translator. He has translated a number of poets, mainly from French but also from Latin. His first major translation was also of Corbière’s work, published to great critical acclaim as These Jaundiced Loves (1995).

“This book will appeal both to general readers interested in poetry and to an academic audience interested in nineteenth-century French literature or Corbière specifically. It will be of particular interest to those who want to find out more about a cult figure of the period, who is still little-known”.

“We are very excited about bringing the poetry and translations in this volume to as wide an audience as possible” said Kate Petherbridge, the Press Manager. “Christopher began his association with the University of Leeds as a student in the 1950s and it’s fantastic that this continues with the publication of this volume by White Rose University Press”.

This bilingual edition, with an introductory chapter and annotations, also features video readings of some of the poems in both French and English. It is the third book to be published by White Rose University Press, joining the successful Star Carr volumes, and the newly published Occupation diaries of Madeleine Blaess.

Oysters, nightingales and cooking pots can be read and downloaded for free through the White Rose University Press website.

Find out more about the White Rose University Press (WRUP).