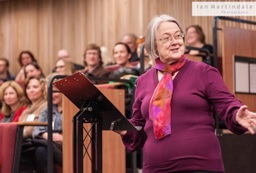 York Law School was extremely pleased to welcome over 350 delegates to the annual conference of the Socio Legal Studies Association at the end of March 2013. This turn out of legal scholars from all over the world was one of the largest at the conference for some years.

The plenary speaker was Baroness Hale, Deputy President of the Supreme Court of the United Kingdom, who engaged a packed audience with her talk entitled “Should Judges Be Socio-legal Scholars?”  While her initial response her own question was ‘no, of course not’, there was of course a much more reflective, entertaining and nuanced answer which followed on from this ‘short and easy answer’. The full address is now available on the SLSA website.

There were a number of other highlights to the conference including the first time it has run a post-graduate research poster competition and dinner at the National Railway Museum.