LENA is a digital recording device specially designed for babies to wear in a vest. It can record up to 16 hours of data at a time. In our ‘Effects of Input’ study, some families are asked to borrow LENA from us over a weekend. The baby wears the vest and device all day whenever the family are at home and going about their normal routine. Parents can, of course, switch the device on and off as they please so that they can have a private conversation whenever they want.

As babies are unaware that they are being recorded, LENA enables us to obtain much more natural data than if a researcher went into people’s homes with a camera. Additionally, although parents are aware that they are being recorded, it seems that many feel less inhibited than they would be with an outside observer present. We loan families a plastic bib to wear over the LENA vest during mealtimes to give the microphone maximum protection. We also pay families £30 to thank them for their time.

Most of the recording is processed automatically by LENA’s software on our lab computer. However, we do listen to and transcribe what happens during an hour after the baby has woken from a nap. For this reason, parents keep a diary of their weekend’s activities. For more information about how LENA works and is used in America, please go to the manufacturer’s website.

As we are the first university in the UK to use LENA, we keep developing our research, and feedback from families participating in the study is really helpful to us. This is what parents who have taken part in our British and American Cultural Impact study said about their experience.

As we are the first university in the UK to use LENA, we thought it would be good to get some feedback from families who have taken part in our British and American Cultural Impact study. Being recorded for most of a weekend also might seem quite a daunting prospect to some parents. The results of our survey are given below. We are happy that all the families who took part in the survey seemed to enjoy using LENA!

Feedback from families who have used LENA in York

Did you find the device easy to use?

Did you feel self-conscious during the recording or did you forget it was happening?

Do you think that your baby noticed anything different was happening?

Would your baby behave differently if a person came to you to do the recording?

Do you think you would have behaved differently if an outsider had been present?

Did using LENA change your routine or could you go about your day as normal?

Did you and your baby find the vests and plastic mealtime bib comfortable?

Did you find it straightforward to switch the device on and off as you pleased?

Would you recommend other parents to take part in this study?

Did you feel that the money and a gift was compensation for enough your time? 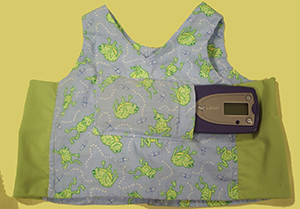 I don’t think my baby was aware of the device. I think that if someone came with a camera then she would have been totally different, as she seems to be aware of when we take a photo or video her. She always stops and smiles!

‌I would recommend to other parents to take part, it’s something fun to do with your child, and it’s interesting to get the study updates. My baby loves the books and often carries around the duck flashcard saying “baaack” – close enough to quack for me!

We really enjoyed taking part in the study and it has made us much more aware of the language that my baby is exposed to. I think it will influence some of the vocabulary we use and hopefully help her to have a better understanding of language from an earlier age.