Paul Drew (BA Exeter, PhD Lancaster) is a conversation analyst whose research includes the basic communicative processes and practices of ordinary interaction, including those associated with social action, repair/self-correction, and turn design; as well as the more specialised interactions in such institutional/organisational settings as criminal courts, social welfare agencies, and especially medical settings, including primary care, oncology, neurology (epilepsy, dementia), neonatology, and telephone therapy. He has conducted applied and consultancy research (aimed at improving the effectiveness of communication) in some of these settings. He has taught extensively internationally, including research training workshops in CA, in Europe, China and the US. He is a Visiting Professor in the Department of Foreign Languages, Shanxi University, China, an honorary member of the China Pragmatics Association, and an honorary Visiting Professor at the University of Huddersfield. He has an honorary degree from the University of Helsinki.

My current research divides fairly evenly between the basic practices of ordinary (social) interaction, and the communicative practices in medicine, usually in doctor-patient interaction. I’m working in broadly four principal areas, two each in basic research and in medical interactions. These are:

Repair and self-correction: Whilst much is known about the mechanisms and practices of repair and self-correction, rather less is understood about what speakers do or achieve through correcting themselves. I’m working on the normative implications of self-correction – focusing on how speakers quite systematically correct themselves in such a way as to change (correct) to a normatively appropriate construction or form for implementing a certain action (for a preliminary version, see Drew, P. et al, (2013) Self-repair and action construction. In Hayashi, M., Raymond, G. and Sidnell, J. (Eds.), Conversational Repair and Human Understanding. Cambridge University Press: 71-94.

Recruitment of assistance (with Kobin Kendrick): The recruitment of assistance constitutes a basic organisational problem for participants in social interaction.One of the most ubiquitous and abiding features of our social lives, indeed of human sociality itself, is that we need, seek, receive or are offered assistance by others, in small things (e.g., help in opening a tight-fitting lid) as well as in larger matters. As was acknowledged by Adam Smith, anticipating Erving Goffman (Man continually standing in need of the assistance of others, must fall upon some means to procure their help, Adam Smith, 1763), minor acts of assistance are essential in enabling us to manage the tasks of our ordinary, daily social lives; without such assistance we might struggle to manage certain tasks at all, or to manage them without undue difficulty or inconvenience. Kobin and I are exploring the methods through which recruitments of assistance are managed. Publications so far are Drew, P. & Kendrick, K. (2017) Searching for trouble: recruiting assistance through embodied action. Social Interaction: Video-based Studies of Human Sociality, 1: and Kendrick, K. & Drew, P. (2016) Recruitment: offers, requests, and the organization of assistance in interaction. Research on Language and Social Interaction, 49: 1-19.

Telephone delivery of low-intensity (CBT) therapy for patients with anxiety and depression: I am working (with Annie Irvine) on an NIHR-funded study, ‘Enhancing the quality of psychological interventions delivered by telephone’ (EQUITy). This is a five-year programme of multi-disciplinary research, led and coordinated by Penny Bee and Peter Bowers at the University of Manchester, which aims to improve the way that psychological interventions are delivered over the telephone. Annie and I are analysing the interaction between patients and practitioners in telephone-mediated therapy sessions, in a number of centres around the country.

Improving communication during conversations about limiting life sustaining treatment in neonatal intensive care: In a project funded by the charity SANDS and led by Neil Marlow, a neonatologist at UCL, and including a group from UCL Institute for Women’s Health, and Homerton University Hospital, we are investigating the conversations between neonatal doctors and the parents of very premature babies. These challenging conversations occur when it becomes clear that the risk of a sick baby dying or of surviving with very severe disability needs to be raised, and treatment options considered. Often as a result a decision is made to change from full intensive care to palliative, or end of life, care. We are recording and studying these conversations in 3 centres across the country.

In addition, I am assisting with a project at the LSE:

Justice interactions and peacebuilding: An ERC-funded project led by Denisa Kostovicova, at the London School of Economics, is exploring how people interact with each other in response to post-conflict justice across national, ethnic, gender and age groups in different deliberative domains. The aim of this interdisciplinary, mixed-method research is to deliver fine-grained multi-language empirical analysis of patterns of discourse in four former Yugoslav countries (Serbia, Bosnia and Herzegovina, Kosovo and Croatia), selected as a typical case of post-conflict justice practices. My role is to provide training to the research team in the methodology of CA, and in the application of that methodology to the kinds of data with which the team are engaged. 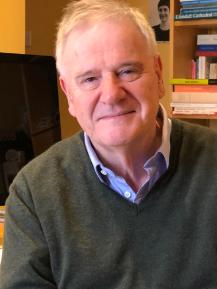