Blog: The World Health Organisation: What does it spend its money on?

Sumit Mazumdar explains how the WHO decides where to spend its funds, and how it allocates money between different global health programmes and regions.

The recent decision by US President Donald Trump to halt US funding to the World Health Organization (WHO) in the middle of the coronavirus pandemic sparked a major controversy. The US is one of the largest donors to the WHO, contributing nearly US$90 million (£72.7 million), or about 16% of the organisation’s total budget in 2018-19.

To put the debate in perspective, it’s useful to understand how the WHO decides where to spend its funds, and how it allocates money between different global health programmes and regions.

Where WHO funds come from

The WHO shares a common funding model with other UN agencies. This includes mandatory or “assessed contributions” from the member countries, which are determined by each country’s income level and population. This is supplemented by “voluntary contributions” from both member states and non-governmental organisations (NGOs). In recent years, multilateral development agencies such as The Global Fund, Global Alliance for Vaccines and Immunization, and philanthropists such as the Bill and Melinda Gates Foundation have emerged as key voluntary contributors.

The share of assessed contributions in the overall budget has steadily declined, from about 47% of the total programme budget in 1998-99 to 16% in 2018-19, remaining almost stagnant at a little over US$1 billion (£0.8 billion) over the past decade and a half. 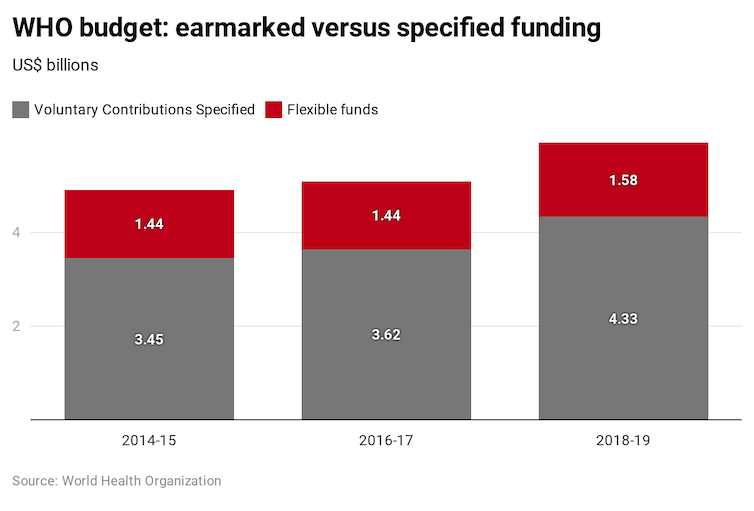 Even when the flexible elements of the different funding streams are taken into account, 69% of WHO’s overall current budget is financed by funds allocated for specific uses. This increased dependence on earmarked contributions plays a significant role in influencing the allocation of WHO’s budget across different programmes and countries and sustaining it over time.

Who decides where the WHO’s money is spent

Every year, the decision-making body of the WHO – the World Health Assembly (WHA) comprised by delegations from all 194 member states – is convened in Geneva. The WHA, which had its 72nd Session in May 2019, reviews and approves the WHO’s programme budget, which specifies which programmes and regions the money would be spent on.

This draws on a document referred to as the General Programme of Work (GPW) which details the strategic priorities and goals of WHO, which are usually linked with other global development commitments such as the Sustainable Development Goals (SDGs).

The financial estimates for the GPW – the current GPW is for 2019-23 – sets out the resources required for the different activities and areas of the WHO’s global work. These are mapped to specific targets that can be easily monitored. For example, the ongoing plan sets out the money needed to achieve the “triple billion” target for a billion people to each benefit from achieving universal health coverage, better protection from health emergencies and better health and well-being.

The GPW and financial estimates are first approved by the WHO’s executive board, and then by the member countries at the WHA. Different NGOs who contribute voluntary contributions also get to review and approve activities supported out of their contributions.

How the money is distributed

The total proposed programme budget for the WHO for 2020-21 is US$4.84 billion (roughly about US$2.4 billion per year), a 9% increase from the budget for the previous two years. In addition, $US1 billion is earmarked for emergency operations.

WHO budgets are divided between its six regional offices and the headquarters in Geneva. The funds are allocated into base programmes which have six categories:

There are also distinct budget lines on special programmes, for example on tropical disease research, and a new scientific research division introduced in 2019. And there is a dedicated budget line on polio eradication.

Except for polio eradication activities, and for certain health emergencies, such as in areas affected by conflict in Yemen and South Sudan, WHO budgets are rarely spent directly on delivering health services or programmes. Instead, the money is mostly used to provide scientific and technical advice to governments.

This ranges from helping to develop health policies to collecting and using data and other scientific research evidence, and providing training. An important aspect of WHO’s work also involves producing guidelines for implementing different health programmes and responding to major heath challenges – and sharing of knowledge between countries.

Among the regional offices, Africa receives the highest share of the WHO’s budgets for the base programmes, followed by the Eastern Mediterranean (mostly countries in West Asia and North Africa), and South-East Asia.

However, nearly a third of the budget for the six core programme categories is retained by the WHO headquarters where most of the scientific research, coordination and compilation of global evidence takes place.

Communicable diseases receive the highest amount of funding – $US805 million in 2018-19, 36% of which was spent in Africa. Health system strengthening programmes, which include support to develop national health strategies, better health information systems and essential health services, received US$590 million. The health emergencies programme also received US$554 million, which was mostly spent in Africa and West Asia.

The budget for polio eradication – mostly funded through voluntary contributions – amounted to nearly $US1 billion in 2018-19 with more than half a billion flowing to Africa and West Asia. These funds directly support a substantial number of technical staff, as well as several other costs such as transport and equipment indirectly in these regions.

As polio is either eradicated or on the verge of being so in most of these countries, some concerns have been raised on alternative plans to fund the work of the technical staff once the specific money earmarked for polio stops.

With the global community gearing up its response to the coronavirus pandemic and reassessing coordinated responses, it’s important the WHO has the financial resources and flexibility in allocating them to develop and implement solutions to new and existing global health challenges.

This article by Sumit Mazumdar was written for The Conversation and is republished here under a Creative Commons Attribution-NonCommercial 4.0 International license.