Namrata Ravichandra Ganneri is Commonwealth-Rutherford Fellow based at the Centre for Global Health Histories (CGHH) and the Department of History for 23 months (22 March 2018 to 21 February 2020). Her project, entitled ‘India’s Smallpox Eradication Programme as a Global Roadmap’, closely examines pilot programmes conducted in the Indian state of Goa to offer a fuller picture of the global history and narrative of smallpox eradication.

She is on study leave from her position as Assistant Professor in History at SNDT College of Arts & SCB College of Commerce and Science for Women, Mumbai where she has been employed since 2007. In 2017, she successfully led her college through its first ever review by the National Assessment and Accreditation Council (NAAC), an autonomous body established by the Indian government for assessing all higher education institutions in the country. She has also been closely associated with the two hundred year old Asiatic Society of Mumbai (ASM) and served as member of the managing committee for two consecutive terms.

Namrata earned her PhD from Jawaharlal Nehru University, New Delhi. Recipient of prestigious scholarships for post-graduate study, she won the highly competitive University Grants Commission - Junior Research Fellowship (UGC-JRF) for doctoral study awarded by the government of India. Her scholarship received professional recognition with the O.P. Jaiswal Award for the best research paper on Indian National Movement by the Indian History Congress (IHC), the largest body of professional historians in India. The paper entitled ‘The Hindu Mahasabha in Bombay (1923-1947)’ based on her doctoral research on the organizational articulation of Hindutva was presented at the 75th session of the IHC held at New Delhi in 2014.

Namrata is currently working on a monograph on the early history of the Indian smallpox eradication programme. This is a projected outcome of her Commonwealth-funded research at the University of York. With a focus on the period between 1958 and 1967, Namrata hopes to argue that World Health Organization’s intensified phase of global smallpox eradication extensively drew upon the experience of the Indian programme. This research uses the World Health Organization’s smallpox eradication archives as well as material from Indian government publications to advance a fresh narrative of the story of the global victory over smallpox.

In 2018 Namrata finished a research project documenting and retrieving the history of physical culture clubs/homes in the city of Mumbai/Bombay that were patronized by Parsis, a small but wealthy religious minority, generally over-represented in organized sports and body building in colonial Bombay. Funded by an institutional donor, this project built on Namrata’s earlier research which examined transformations in India’s indigenous sporting traditions and received financial support from the government of India. Her study mapped debates on the construction of an indigenous sporting canon in western India, and argued for a careful consideration of the nature and meanings of sports proselytism at the turn of the twentieth century. She just completed an image essay ‘Pahalwan Portraits: Consumers of Physical Culture in Western India’ commissioned by by Tasveer Ghar, a Digital Network of South Asian Popular Visual Culture and available open access.

Namrata’s MPhil and PhD research traced the trajectory of Hindu right wing mobilization in western India. Her work commented on the social and political groups which gravitated towards these exclusionary organizations. It specially drew attention to the hitherto under-investigated histories of political mobilization of women on the right in colonial India, some of which has appeared in refereed publications.

‘Notes on Vyayam: a vernacular sports journal in western India’ in The Newsletter of the International Institute of Asian Studies, No 69, Autumn 2014. 8.

Commissioned  book chapters, ‘Identity and Communalism’ and ‘Negotiating spaces within religion’ for the course ‘Women and Social Structure’ for the masters level programme in Women’s and Gender Studies offered by Indira Gandhi National Open University (IGNOU), New Delhi, were published in 2014. The material is now available on eGyanKosh, a national Digital Repository for ODL content from across India. http://egyankosh.ac.in/handle/123456789/5555, http://egyankosh.ac.in/handle/123456789/5544

Namrata has taken avid interest and co-organized several Global Health Histories Seminars, a webinar series that is a collaborative project run by WHO Regional Office for Europe, University of York and University of Exeter, now in its second year.  She presented her work in this series in early November 2019. You can watch the seminar online.

She regularly represents the University in meetings at the WHO Regional Office in UN City (Copenhagen, Denmark). She is now organizing the inaugural CCH 2020 seminar titled, ‘‘What works’? Complementary and alternative medicines in the ‘biomedical’ world’ in early February 2020.

Namrata is committed to writing for and engaging with audiences beyond academia.

To improve visibility of women scientists and innovators in digital spaces, Namrata is organizing a Wikipedia edit-a-thon called ‘Championing Women’s Voices on Wikipedia’. 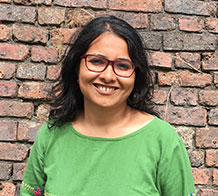