Visit John Cooper's profile on the York Research Database to:

My immersion in the sixteenth century began at Merton College, Oxford, where I was taught by Steven Gunn and Blair Worden, and attended lectures by Christopher Haigh and Penry Williams. I studied for an MA as a Thouron Fellow at the University of Pennsylvania before returning to Oxford to research my doctorate on Tudor royal propaganda. I came to York in 2005, having worked on the Tudor desk at the Dictionary of National Biography and as a teaching fellow at Lincoln College, Oxford.

My research focuses on the political, religious and cultural history of sixteenth-century England, and I am also interested in the history of early colonial America and Ireland. I write for the Times Literary Supplement and give regular public lectures – see ‘External Activity’ for more details.

My research centres on the monarchs whom we call 'the Tudors': their policies in church and state, the relationship between court and country, and the ideas and strategies by which royal power was justified. My first book, Propaganda and the Tudor State, examined popular perceptions of kingship from a provincial perspective, surveying art, architecture and sacred drama alongside more conventional historical records. In 2009 I introduced and co-edited Henry VIII: Arms and the Man, the catalogue of the Henry VIII exhibition at the Tower of London.

My latest book, The Queen’s Agent: Francis Walsingham at the Court of Elizabeth I (Faber, 2011), examines the career of Queen Elizabeth’s principal secretary and spymaster. As ambassador to France, Walsingham witnessed the St Bartholomew’s day massacre and was intimately involved with negotiations for a marriage alliance. Appointed to the privy council, Walsingham rose to become one of the most powerful men in government, responsible for maintaining the Queen’s safety at home and abroad.

My latest project focuses on St Stephen’s Chapel in the Palace of Westminster. The fire of 1512/13 prompted Henry VIII to abandon Westminster as a royal palace, but the building remained at the heart of national life. In 1547 the medieval chapel royal was converted to become the first permanent meeting place of the House of Commons. Another focus of my research is the magnificent cloister built by Henry VIII’s physician, one of the few parts of the palace to survive the great fire of 1834. This is one strand of a major collaboration between the University of York, the Palace of Westminster, the History of Parliament and the Institute of Historical Research.

I welcome enquiries from anyone considering postgraduate research in early modern British history, especially the monarchy, the Reformation, rebellion and popular politics, and the British context of state power.

York is at the forefront of research in early modern British history, recruiting large numbers of students from the UK and around the world. The J.B. Morrell Library offers access to State Papers Online and Early English Books Online and has a wide range of primary and secondary resources, supplemented by the holdings of York Minster Library. The Raymond Burton Library for Humanities Research has the Elton collection of books on open shelves. The Borthwick Institute for Archives houses the records of the Archbishop of York and the recently re-catalogued cause papers, as well as a host of other material relating to religious and social history. Expert training is offered in palaeography and research skills. The interdisciplinary Centre for Renaissance and Early Modern Studies hosts frequent lectures and seminars, and fosters a vibrant research culture, in a stunning new building.

Recent public lectures include the National Portrait Gallery, the Tower of London, Hampton Court Palace, and literary festivals in Warwick and Ilkley.  I have been a guest speaker on the Cunard ships 'Queen Mary 2', 'Queen Elizabeth 2' and 'Queen Victoria', and I often give talks to schools, history societies and local groups of various kinds. 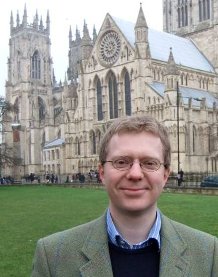 Drop in, or email in advance for online appoointment.