Visit Colin Divall's profile on the York Research Database to:

Colin Divall’s main research interests are in the history of transport and mobility, the history of technology (particularly in the nineteenth and twentieth centuries), and the public histories of both of these fields.

Colin is a member of the editorial board of the International Journal for the History of Engineering and Technology and was on the board of the Journal of Transport History from 1997 to 2015. He was until recently a contributing editor of Technology and Culture and until 2013 a Vice President of the International Association for the History of Transport, Traffic and Mobility (T2M).

He is a member of the Institute of Railway Studies, run jointly with the National Railway Museum, and also of York Management School’s Centre for Evolution of Global Business and Institutions.

Colin’s research focuses on the history of transport and mobility, with an emphasis on the late nineteenth and twentieth centuries; the social history of engineering and technology; and the ways in which the public engages with these aspects of the past through institutions such as museums and heritage sites.

He recently ran a large AHRC-funded project on the marketing techniques developed by Britain’s railways between 1870 and 1975, looking at how the private companies and then the nationalized industry encouraged people to travel by train. More generally, he is interested in how the long history of our attitudes towards mobility might inform the development of policies and practices aimed at ecologically and socially sustainable forms of transport.

Colin is not available to supervise new research students.

Search Engine, the National Railway Museum’s extensive library and archive, offers superb facilities for studying British and many overseas railways in the nineteenth and twentieth centuries; the Museum’s collections are also of great value to historians whose primary interest is not transport. There are strong holdings in the history of transport and mobility at the JB Morrell and Minster Libraries; the University and Museum’s library catalogues are fully integrated. Further afield, the National Tramway Museum, located at Crich in Derbyshire, has a world-class collection of library and archival material relating to the history of urban transport and planning in Britain and overseas. 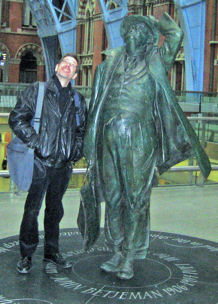