Francis Walsingham at the Court of Elizabeth I 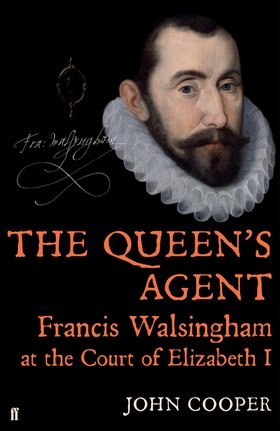 "John Cooper paints Francis Walsingham in all his extraordinary energy and range, at the centre of Elizabethan politics, government and defence of the realm. It is a vivid portrait in a lively landscape."Diarmard MacCulloch

"With lucid scholarship and vibrant storytelling, John Cooper has created an engrossing portrait of the most subtle of Elizabeth's statesmen."Helen Castor

"John Cooper follows Francis Walsingham, spymaster and arch-politician, through his extraordinary life, from refugee of conscience escaping Mary Tudor to the Elizabethan advisor whose information network entrapped Mary Queen of Scots and defeated the Spanish Armada. Cooper describes a courtier who combines Protestant conviction with a flexible conscience towards his enemies. A book for the library of any Tudor enthusiast." Philippa Gregory

Elizabeth I came to the throne at a time of insecurity and unrest. Rivals threatened her reign; England was a Protestant island, isolated in a sea of Catholic countries. Spain plotted an invasion, but Elizabeth's Secretary, Francis Walsingham, was prepared to do whatever it took to protect her.

He ran a network of agents in England and Europe who provided him with information about invasions or assassination plots. He recruited likely young men and 'turned' others. He encouraged Elizabeth to make war against the Catholic Irish rebels, with extreme brutality and oversaw the execution of Mary Queen of Scots.

The Queen's Agentis a story of secret agents, cryptic codes and ingenious plots, set in a turbulent period of England's history. It is also the story of a man devoted to his queen, sacrificing his every waking hour to save the threatened English state.

In September 2011, The Queen's Agent was selected and serialised by BBC Radio Four as its Book of the Week.

John Cooper is a Lecturer in Early Modern History in the Department of History and the Centre for Renaissance and Early Modern Studies. He works on the political, religious and literary history of sixteenth-century Britain.

Click here to listen to a podcast from BBC History Magazine, in which John Cooper speaks about Sir Francis Walsingham.