Visit Harry Munt's profile on the York Research Database to:

Harry Munt is a Senior Lecturer in Medieval History. Before joining the department in 2014 he was a British Academy Postdoctoral Fellow in the Faculty of Oriental Studies and Wolfson College at the University of Oxford. His research and teaching focuses on the history of the Islamic world, ca. 600–1500. In particular, he works on the history of the Arabian Peninsula in the early Islamic centuries, Islamic holy cities and pilgrimage, and Arabic history-writing in the medieval period. 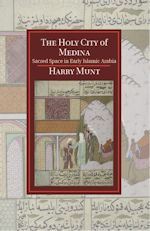 Harry’s research is predominantly focused on the history of the early Islamic Arabian Peninsula, Islamic holy cities and pilgrimage, and Arabic history-writing in the medieval period. His published articles to date explore various themes connected to these areas, including the origins of Arabic local history-writing, the early history of the pilgrimage to Mecca (the hajj), the economic history of the Arabian Peninsula in the early Islamic centuries and the interaction between Muslim ruling classes and their non-Muslim subjects. His first book, The Holy City of Medina: Sacred Space in Early Islamic Arabia, is the only detailed study of the emergence of Medina (in modern Saudi Arabia) as a holy city over the course of the first three Islamic centuries (the seventh to ninth centuries ce). In this book, Harry focuses on the roles played by the Prophet Muhammad, the early caliphs and Muslim legal scholars in Medina’s emergence as a holy city and demonstrates that this emergence was the result of a set of far more gradual and contested processes than previously realised. He also shows how these processes were intimately linked with important contemporary developments concerning the legitimation of political, religious and legal authority in the Islamic world.

Harry’s current research is on the enormously popular phenomenon of Arabic and Persian local history-writing in the medieval Islamic world. He is interested in the social, cultural and political background behind the burgeoning interest in such works across a wide geographical area, the extent to which authors and readers of these works considered local history to constitute a separate genre of Arabic and Persian literature, and the extent to which these local histories offer narratives of Islamic history that differ from those found in the better known work of universal history. As part of the book he is currently writing on this topic, he also demonstrates how local histories can shed new light on topics such as medieval Muslim concepts of towns/cities and the ways in which Muslim elites dealt with the pre-Islamic history of their hometowns and the histories of the non-Muslim communities who lived alongside them.

Drop in, or email for online appointment.