Visit Oleg Benesch's profile on the York Research Database to:

Oleg Benesch is Professor of Modern History, specializing in the history of Japan and China in a global context. Oleg’s publications and teaching interests cover a variety of fields, including intellectual, cultural, and social history, and he is especially interested in uses of the past in East Asia. He regularly presents his research findings at academic conferences and invited lectures throughout Asia, Europe, and North America, and his primary research languages are Japanese, Chinese, German, and English.

For further information about Oleg and his research, please see his website olegbenesch.com

Oleg’s research focuses on the historical exchange and development of ideas and concepts across societies, with a focus on interactions between Japan, China, and the West. Oleg’s educational backgrounds in both history and philosophy inform his major research interests, as well as his interest in interdisciplinary work. His work often takes a comparative approach, examining themes including nationalism, identity, nostalgia, masculinity, memory, heritage, and authenticity. Oleg welcomes inquiries from potential PhD students with related interests.

Oleg’s first monograph, Inventing the Way of the Samurai: Nationalism, Internationalism, and Bushido in Modern Japan (Oxford University Press, 2014), explores the historical development of the ostensibly traditional Japanese ethic of bushido (‘the way of the samurai’). This book re-examines bushido as a modern invented tradition that developed from a search for a ‘national’ identity in late nineteenth-century Japan. Bushido was subsequently appropriated for a wide variety of official and private purposes in the early twentieth century, becoming a key pillar supporting the ideological structure of the imperial state. This book also considers the reasons behind the revival of bushido in the postwar era, when comparable nationalistic concepts from the imperial period remain largely forgotten or ignored.

Oleg’s second monograph, Japan’s Castles: Citadels of Modernity in War and Peace (Cambridge University Press, 2019), was co-authored with Prof Ran Zwigenberg of Pennsylvania State University. This book shows how castles have been used to re-invent and recapture competing versions of the pre-imperial past and project possibilities for Japan's future. It argues that Japan's modern transformations can be traced through its castles. Castle preservation and reconstruction campaigns served as symbolic ways to assert particular views of the past and were crucial in the making of an idealized premodern history. Castles have been used to craft identities, to create and erase memories, and to symbolically join tradition and modernity. Until 1945, they served as physical and symbolic links between the modern military and the nation's premodern martial heritage. After 1945, castles were cleansed of military elements and transformed into public cultural spaces that celebrated both modernity and the pre-imperial past. What were once signs of military power have become symbols of Japan's idealized peaceful past.

Oleg is a strong believer in the value of collaborative research. He is a co-author of the 2015 book, Civilizing Emotions: Concepts in Nineteenth-Century Asia and Europe, also published by Oxford University Press. Bringing together scholars working on thirteen different regions, this research project utilized the approaches of the history of emotions and the history of concepts to provide a new global perspective on how the concepts of civility and civilization informed the history of emotions.
Oleg has several ongoing long-term research projects, and is currently completing a monograph that examines the concept of ‘medievalism’ in a global perspective, with an emphasis on interactions between Europe and East Asia. A separate research project examines the influence perceptions of militarism and martial identity have had on China-Japan relations. Another major area of Oleg’s research is the martial arts, especially the relationship between masculinity and the martial arts in a transnational context. Other areas of interest include the history of drugs, the history of sport, and the role of graphic narratives in historical teaching and research. For further information about these research projects and related publications, please see Oleg’s website olegbenesch.com. 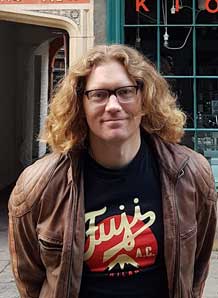 Drop in, or email for online appointment