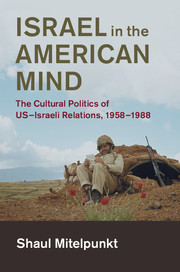 Dr Shaul Mitelpunkt, Lecturer in 20th century US history, is set to bring out the volume later this month. Entitled Israel in the American Mind: The Cultural Politics of US-Israeli Relations, 1958–1988, it examines the relationship between the two countries in the context of the cultural, social, intellectual, and ideological landscapes of both societies. The study is the first to investigate the complex mechanisms that defined and continually redefined Israel in the mind of Americans throughout the 1960s and 1970s.

Shaul also examines how Israelis manipulated and responded to American perceptions of their country, and reveals the reservations that some Israelis expressed towards their country’s relationship with the US. By investigating previously unexamined sources, the book contextualises the relationship of the two nations with the changing domestic concerns of both countries.

The volume has already garnered praise from leading writers in modern history; Barbara Keys speaks of a “brilliant demonstration of the power of culture in international relations”, whilst Andrew Rotter has called it “enlightening, dismaying, even at times amusing, but altogether a superb exploration of the vital and fraught relationship between Israel and America”.