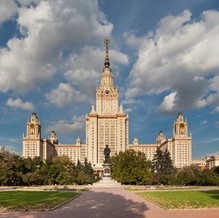 ‌Anniversary professor in history David Moon visited St Petersburg and Moscow in February 2016, and spoke to students and academics there about his work.

He delivered a keynote lecture entitled ‘Place-Based Environmental History Projects in Britain and Russia’ at an International History Student Conference, ‘Usable Pasts’, in the Department of History, Higher School of Economics, St Petersburg. He also spoke about his research project, The Amerikan Steppe/Американская степь: Influences from Russia and Ukraine on the Great Plains, 1870s-1930s, at a seminar in the Faculty of Geography at Moscow State University on 15 February.

Professor Moon spent much of his time during the visit conducting research in the Archive of the Russian Academy of Sciences in Moscow into contacts between Russian and American environmental scientists in the first half of the twentieth century.

The visit was funded by the Leverhulme Trust and the Higher School of Economics, St Petersburg.