Unlocking the secrets of climate resilience 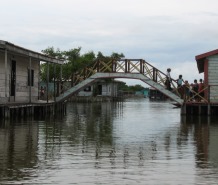 The History Department will be working with the departments of Environment and Politics at York on a new ESRC-funded project. The multi-disciplinary team will combine approaches from the natural and social sciences and the humanities to understand how traditional coastal communities in the Colombian Caribbean can overcome the challenges of environmental change.

Building resilience in these vulnerable communities is critical for successful adaptation to climate change and climate-related extreme events such as floods and droughts. The project is being led by Piran White (Environment), Henrice Altink (History), and Jean Grugel (Politics), in collaboration with scientists from Cambridge and Southampton and academic and non-academic partners in Colombia. The researchers will bring together social, political, cultural and environmental histories to investigate how communities have responded to slow and shock environmental changes over a 200-year period.

The project will focus on communities within the Biosphere Reserve site of Cienaga Grande de Santa Marta (CGSM), Colombia’s largest coastal lagoon system and one of its most important artisanal fisheries. The system is under threat from a wide range of environmental pressures including sea level rise, warming climate and reduced precipitation, and increased frequency and severity of floods and droughts, with large-scale fish kills increasingly common.

The researchers will use cores taken from mangrove sediments around the lagoon to identify and date key environmental shocks in the past, and then use historical sources including literature and arts-based works to identify the range of social, political and cultural responses to these past pressures. Understanding resilient responses in the past will help to identify ways in which resilience could be enhanced in these communities to prepare them better for future shocks.