Centre for Christianity and Culture launches touchscreens at Worcester and Lichfield 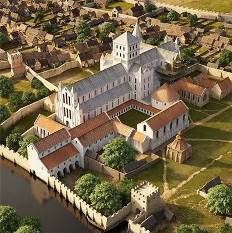 The Centre for the Study of Christianity and Culture (C&C) has developed interactive touchscreens to enhance the visitor experience at two of the UK's most beautiful cathedrals.

C&C has been involved in a three-year partnership with Worcester Cathedral, which drew to a close in April. The project included the launch of new interactive touchscreens exploring the cathedral’s monastic past and current life. The touchscreens take visitors through the Cathedral’s Anglo-Saxon roots and World War One, with details of Saints, musical heritage, King John and Magna Carta connections along the way.

The research and technical team at C&C have already developed a free mobile app which offers visitors three trails to follow to explore the rich history and spiritual significance of the Cathedral. A new trail, exploring the monastic precinct and daily life, will be added this summer.

C&C have also revealed new touchscreens to visitors as part of their ongoing three-year project with Lichfield Cathedral.  This project focuses on specific elements of the cathedral’s heritage, and the first stage explores the recently-completed conservation of the famous stained glass of the Lady Chapel.

Originally made for the abbey of Herkenrode in modern-day Belgium, this magnificent 16th century glass was bought for Lichfield in the early 1800s in the aftermath of the French Revolution. The new touchscreens enable visitors to discover the meaning of the scenes and figures depicted, learn about the process of conserving the glass, and its journey to Lichfield.

Over the next two years the project will focus on Lichfield’s rich Anglo-Saxon past, as visitors will find out about the 8th century St Chad Gospels, St Chad’s significance in spreading Christianity, his now-lost medieval shrine, and the Lichfield Angel sculpture.