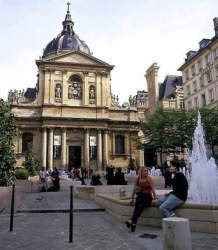 Professor Stuart Carroll was invited to speak at Paris-Sorbonne University, where he shared his theory about the 'politics of emnity' dominating early modern society.

Professor Caroll's lecture focussed on a long-running vendetta between two noble families, which involved the whole community. He explored the way in which the fragile equilibrium could be upset in the seventeenth century, and the mediating role the state could play in local issues.