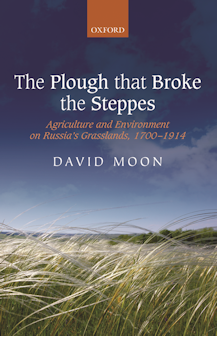 We are delighted to announce that Professor David Moon, Anniversary Professor in History, has been awarded the Alexander Nove Prize in Russian, Soviet and Post-Soviet Studies for his book The Plough that Broke the Steppes: Agriculture and Environment on Russia's Grasslands, 1700-1914.

The judges noted how ‘Moon traces the complex changing relationships between the environment and different groups of people in the making and reshaping of the steppe’. They described the book as ‘a landmark study for all those interested in the history of Russia’.

The Alexander Nove Prize is offered annually by established by the British Association for Slavonic and East European Studies (BASEES) for scholarly work of high quality in Russian, Soviet and post-Soviet studies.‌

The award was announced at the BASEES Annual Conference dinner in Cambridge on 29 March 2015.

Further information about the prize-winning book and its author is available on our publications page.