Loyalty and Liberty: American Countersubversion from World War I to the McCarthy Era 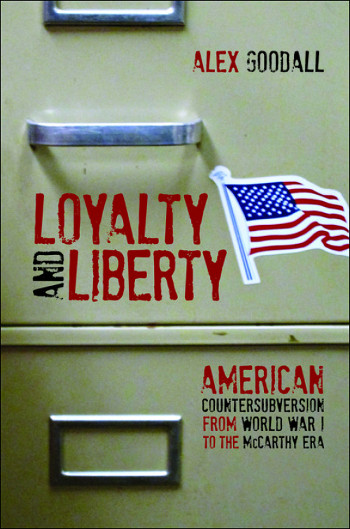 Loyalty and Liberty offers the first comprehensive account of the politics of countersubversion in the United States prior to the McCarthy era. Beginning with the loyalty politics of World War I, Alex Goodall traces the course of American countersubversion as it ebbed and flowed throughout the first half of the twentieth century, culminating in the rise of McCarthyism and the Cold War. This sweeping study explores how antisubversive fervor was dampened in the 1920s in response to the excesses of World War I, transformed by the politics of antifascism in the Depression era, and rekindled in opposition to Roosevelt's ambitious New Deal policies in the later 1930s and 1940s.

Identifying varied interest groups such as business tycoons, Christian denominations, and Southern Democrats, Goodall demonstrates how countersubversive politics was far from unified: groups often pursued clashing aims while struggling to balance the competing pulls of loyalty to the nation and liberty of thought, speech, and action. Meanwhile, the federal government pursued its own course, which alternately converged with and diverged from the paths followed by private organizations. By the end of World War II, alliances on the left and right had largely consolidated into the form they would keep during the Cold War. Anticommunists on the right worked to rein in the supposedly dictatorial ambitions of the Roosevelt administration, while New Deal liberals divided into several camps: the Popular Front, civil liberties activists, and embryonic Cold Warriors who struggled with how to respond to communist espionage in Washington and communist influence in politics more broadly.

is a lecturer in Modern History at the University of York. His research focuses on the history of revolutionary and counter-revolutionary politics in the Americas.

For more information about obtaining this book, please visit the University of Illinois Press.