York scholar receives award to conduct archival research on his project, 'The Deluge - The 1924 Leningrad Flood: Events, Reactions and Responses' 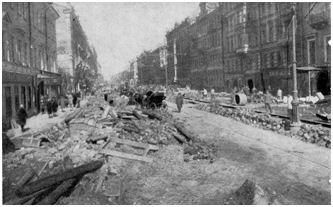 Rob was one of twenty two successful from across the university from a total of 130 applications.  The project will undertake original archival research into the events of the September 1924 Leningrad flood, the responses of local and national government, and the reactions of Leningraders to flooding.  The project will examine local and national newspapers, archival materials and memoir materials.  The projects will address the following interrelated questions: How well equipped was local government to deal with flooding?  How did a city recently ravaged by war, revolution and civil war, and its inhabitants, respond to natural disaster?  How did municipal authorities and the Bolshevik state assist flood victims and repair the damage?  How did Leningraders subsequently interpret the flood?

Rob will be using the award to conduct archival research in Saint Petersburg and Moscow, and to establish contact and connections with a number of Russian historians, particularly of the history of flood and the urban history of Leningrad in the 1920s.

Rob will be blogging on the progress of his research and some of his initial research findings throughout the duration of the award in July 2012, and through the summer.  You can follow Rob’s research and find out more about the project on: