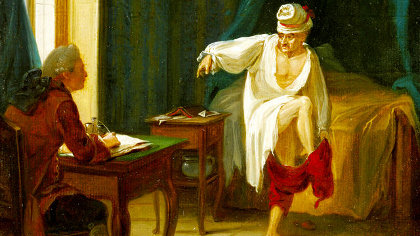 In this week's episode of BBC Radio 4's much-loved 'In Our Time', the Department of History's Anniversary Professor, David Wootton, joins Melvyn Bragg and other guests to discuss Voltaire's novel Candide.

First published in 1759, the novel follows the adventures of a young man, Candide, and his mentor, the philosopher Pangloss. Candide was written in the aftermath of a major earthquake in Lisbon and the outbreak of the Seven Years' War, events which caused such human suffering that they shook many people's faith in a benevolent God. Voltaire's masterpiece piles ridicule on Optimism, the fashionable philosophical belief that such disasters are part of God's plan for humanity - that 'all is for the best in this best of all possible worlds'.

Often uproariously funny, the novel is a biting satire whose other targets include bad literature, extremist religion and the vanity of kings and politicians. It captivated contemporary readers and has proved one of French literature's most enduring classics.

David Wootton
Anniversary Professor of History at the University of York

Caroline Warman
Lecturer in French and Fellow of Jesus College at the University of Oxford.

To listen to this recording, please visit: www.bbc.co.uk/radio4/features/in-our-time/