August 2011 sees the release of a pathbreaking new study of African-Jamaican womanhood by Henrice Altink.

Destined for a Life of Service: Defining African-Jamaican Womanhood, 1865-1938 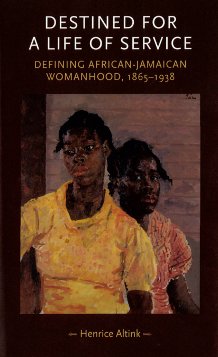 This study examines the construction of black womanhood in Jamaica between 1865 and 1938. Based on a wide range of original sources, including folktales, anthropological studies, court statements, poety and speeches, it sheds new light on the struggle of people of African descent for full and equal citizenship in the post-emancipation British Caribbean. It examines the messages that African-Jamaican women were given about their place and roles from within and outside their own community, the extent to which these messages intersected with class and colour ideologies, and African-Jamaican women's attempts to realise these ideals of feminity amidst various constraints.

Incorporating the full realm of African-Jamaican women's experiences, exploring not just their sexuality and reproduction but also their roles as labourers, citizens and freedom fighters, the book also links shifting gender ideologies to citizenship, race and nation. Essential reading for undergraduates and graduates interested in gender within the British Caribbean during the critical transformative period between 1865 and 1938, it will also interest political scientists and other scholars working on questions of nationalism, transnationalism and the gendered nature of citizenship.

Henrice Altink is Senior Lecturer in Modern History. Henrice is author of Representations of Slave Women in Discourses on Slavery and Abolition (London: Routledge, 2007) as well as numerous articles and essays.