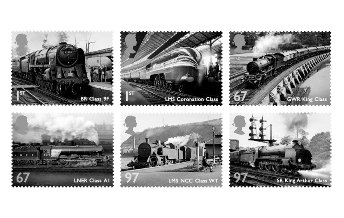 Always popular with stamp collectors and the general public, trains and railways are one of the most covered topics on British commemorative stamps. The twentieth such issue – Great British railways – appeared in August 2010 with the help of York transport historian Professor Colin Divall. Issued in August 2010, the set of six stamps celebrate the ‘Big Four’ railway companies, featuring classic British locomotives. The ‘Big Four’ – London, Midland & Scottish (including the Northern Counties Committee in Northern Ireland), the London & North Eastern, the Great Western and the Southern Railways – ran Britain’s railways from 1923 until 1948 when they merged to form British Railways. They also commemorate the 50th anniversary of the last steam locomotive to be made and used in the UK, British Rail’s Evening Star, which brought to an end over 130 years of steam-locomotive building for Britain’s mainline railways.