News from the city: if in Naples, a traveller...

If you want to give your contribution with news and pictures from Naples, now you can, send an email to: fb798@york.ac.uk 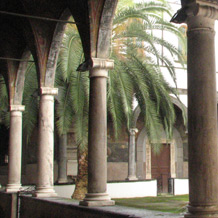 Don't miss the next events and festivals in Naples, visit the websites listed below:

Mediterranean and Middle-Eastern Conversations at MADRE

The Lebanese Walid Raad's exhibit at Madre ( Preface/Prefazione, until January 19 2015) provides the change to bring forward the current geopolitical situation in the Middle East. The Fondazione Donnaregina for contemporary arts, Museo MADRE, along with the University of Naples, L'Orientale, want to offer a cycle of three meetings revolving around the Arabic world, aiming to deliver to the audience an ecletic, as well as multidisciplinary, frame of the Mediterranean and Middle Eastern culture.
Architecture, urbanism, cinema, alongside post-colonial studies will be the core of these sessions, starting with Lucia Tozzi, journalist and art historian, dealing with Beirut, Cairo and Jerusalem, as three archetypes of urban metamorphosis. The meeting is on Monday, October 27th, 6 pm, at Sala delle Colonne.
Further meetings will gather the works of Ian Chambers, Professor of Cultural and Post-colonial Studies at the University L'Orientale, alongside the researcher Celeste Ianniciello, with 'Gli archivi del Mediterraneo e i passaggi di Walid Raad' ('The archives of the Mediterranean and Walid Raad's moves'), 10th November, 6 pm, and Gina Annunziata, Professor of History and Film Critique at L'Orientale, with 'Identità in frammenti. Il cinema libanese contemporaneo' (Fragmentary identity. The contemporary Lebanese cinema), 1st December, 6 pm.
Gianluca Riccio, Professor of History of Contemporary Art at L'Orientale, will be introducing and coordinating each session.

'Rumori Telepatici' (Thelepathic Noises) is the title of Franco Vaccari's first exhibit at Museo Madre, in the context of PROGETTO XXI, sponsored by Fondazione Donna Regina for Contemporary Arts and in collaboration with Fondazione Morra. The exhibit encompasses historical but unreleased works, as pictures from Photomatic d'Italia, 1973-1974, the making of a space on the between the public and the private, screening of videos, such as I Cani Lenti, 1971, and at last the installation of a spotlight, revealing the sky above Palazzo Caracciolo di Avellino.
Preview with the artist on Friday, 7 October 2014, 12 noon, at Fondazione Morra Greco Largo Proprio di Avellino 17, Napoli.
Save date! Programme: Vaccari- Preview (MS Word

Museo Madre opens its new season of special events and exhibits, by starting from an explosive September. In particular, Progetto XXI , in collaboration with Fondazione Morra- Museo Nitsch, explores the story of visual poetry between Naples, Genua, Milan, Florence, Rome and the international panorama. Moreover, the program also includes a special section for young artists, with PRE POST ALPHABET, edited by Eva Fabbris and Gigiotto Del Vecchio, reconciling traditional and substantial figures of the visual poetry and the methodologies belonging to the new generations. Madre is also music, cinema and food. Stay tuned and check the website out: http://www.madrenapoli.it/attivita/eventi/.

The San Carlo at Madre

The Teatro San Carlo and the MADRE Museum will be greeting the end of the Neapolitan summer nights in a one-off event: a double concert of contemporary music, played by the orchestra and the choir of Teatro San Carlo, in the beautiful courtyard of the museum. Protagonists of the show will be pieces by Sofia Gubajdulina and Arvo Paert. Save the date: September 26, 2014. The concert is free.

A tribute to Lucio Amelio

Wednesday, July 2nd 2014, the Madre will be hosting a research project dedicated to Lucio Amelio, groundbreaking figure of the national and international artistic panorama, whose research has always intended to question both the production and the social role of contemporary art.
Save the date and come along!
Info: http://www.madrenapoli.it/eventi/una-serata-per-lucio-amelio/.
August at MADRE has never been so convenient: all collections and exhibitions are free until the end of the month.
Do not forget to check the website out to learn more!

Hosted in the historical Palazzo Donnaregina, in Via Luigi Settembrini, Museo Madre is currently working on a new season of exhibitions, relying on the talented works by Ettore Spalletti (13.04-18.08), who makes the light the crucial element of his language, a charming synthesis of painting, sculpture, environmental installations, books, and projects, and Francis Alÿs (14.06- 22.09), who turns Kabul in an unexpected film set, with the streets covered with two picture shows, in a sophisticated game of (un)rolling. Other pieces of works by Vito Acconci, Henri Chopin, Cyprien Gaillard, Dennis Oppenheim, Robert Filliou, Nam June Paik, Gianni Piacentino, Marisa Merz, Francesco Clemente, Mark Manders, and Tony Cragg, provide the spectatorship with an artistic conversation between “old” and "new" purchases, composing an eclectic Intermezzo. Info and programme: http://www.madrenapoli.it/en/.

The urban heritage of Naples has now become the core of an interesting plan of requalification, which is to involve the Cathedral, the historical structures of Saints Sossio and Severino and of Gerolamini, alongside San Paolo Maggiore. Click here to know more about that!

Sixth appointment for the festival named "Odd Couples", related to creative encounters between art and literature, two ways of grasping the essence of the world outside. The event, inaugurated on Wednesday, January 15th, will investigate authors such as Francisco de Quevedo and Caravaggio, told by Giuseppe Montesano, or themes as the adultery, which can rely on great "narrators", like Theodor Fontane and Tintoretto, explored by Anna Maria Carpi and Melania G. Mazzucco.
Info:http://www.multimediale.comune.napoli.it/index.php?n=3857

From the 17th to 30th December the Pan (Palazzo delle Arti di Napoli, Building of Arts of Naples) will host an exhbit by the artist and architect Giuseppe Savarese, from Vico Equense, who will offer his own study on the female figure:a work made up of decompositions, re-compositions, drafts, which all convey the meaning of an ever-anxious and mysterious woman. Info: http://www.comune.napoli.it/flex/cm/pages/ServeBLOB.php/L/IT/IDPagina/23384

The ancient monastery of San Domenico Maggiore, in the heart of the city, will be the setting of a marvellous digital project, sponsored by Forum delle Culture and realized by Rai, Comune di Napoli, Polo Pietrasanta, together with Ministero dei Beni culturali and Istruzione e Accademia delle Belle Arti. The convent will host 117 digital reproductions of masterpies by Leonardo, Raffaello and Caravaggio.
The exhibit will be opened everyday, from 10 am to 10 pm, until April.  Info: http://napoli.repubblica.it/cronaca/2013/12/04/foto/una_mostra_impossibile_a_san_domenico_maggiore-72691002/1/#1
http://ricerca.repubblica.it/repubblica/archivio/repubblica/2013/12/03/capolavori-riprodotti-in-digitale.html